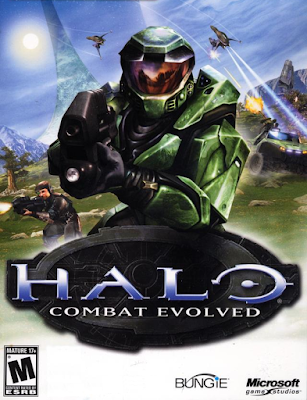 Today is one of the most important dates in military science fiction history: the original HALO game, Combat Evolved is released for the original Xbox console in 2001. This game became a worldwide phenomenon that altered video games, the gaming culture, and the entire genre of military science fiction forever. No one knew or predict that this little first-person futuristic shooter on a brand new home video game console would become a franchise worth billions....Especially me. Oddly, the first time I heard of HALO: Combat Evolved was due to a television advertisement for the game during an episode of Star Trek: Enterprise. Little did I know that what I was watching would alter my life and give rise to FWS. Despite the many other HALO games that have come out via Bungie and 343 Industries over three generations of home consoles, the original 2001 game continues to be ranked as the best of the series, especially in my mind. Not only is my favorite video game, but is the best military SF video game of all time. Back in 2001, I did not own an original Xbox until a few years after the launch of HALO: CE...it would take a home robbery for me in 2004 to convert over to the true faith. I took some of the insurance money around Xmas of 2004 and bought the last original Xbox at Ridgemar Mall in Fort Worth. I bought the massive black box along with ROBOTECH: Battle Cry and HALO: CE. For that first moment I played it, it altered my life and rekindled my love of military science fiction. So, today, dig out your original Xbox and your original copy of HALO: CE and settle into this classic.
Posted by William at 16:30