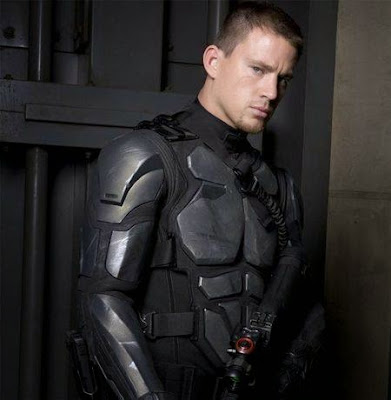 After years of nothing happening, finally we have news on one of the biggest military sci-fi movie in the pipe: The Forever War. Ridley Scott and his production company had the right for years, and since the film did not enter production, the rights were placed back on the market. Reports say that tense bidding war occurred between three studios, and Warner Brothers has won out (who released the recent Edge of Tomorrow). At the moment, Channing Tatum is to star and produce the film with Ron Lee with screenwriter Jon Spaihts (Prometheus) being attached as well. However, the adaptation is without a director, and I wonder if one with the credentials of Mr. Scott will be at the helm of this important military science fiction film. Is this new deal a good thing? I am grateful that The Forever War movie is being pushed forward and could finally see the light of day, but I am not wild about Tatum. Granted, I've never seen a Tatum film, but I just wonder if he can bring the complexity of William Mandella to the silverscreen. Just as important to Channing Tatum is who will play Marygay Potter? No word on that as of yet. I am still hoping that film tells the whole story of the Eternal War and not just the first expedition and the return home to a strangle world alien to the veterans of UNEF. I have a fear that only part of the story will be told. There is also rumors of The Forever War being divided up into several film like the recent Hobbit. So...what do you think? Can Tatum be William Mandella? Will we see The Forever War film?
Posted by William at 22:26