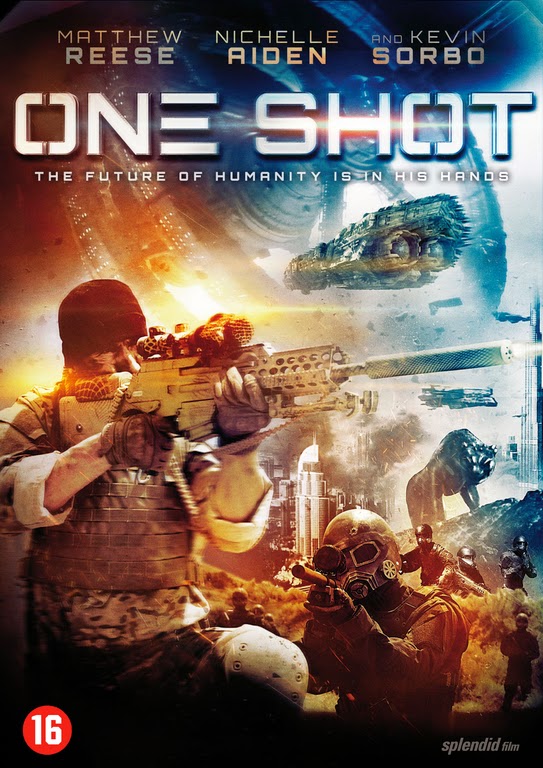 It was brought to my attention by an FWS reader that Kevin Sorbo is starred in a B sci-fi movie about a future sniper during an alien invasion called One Shot. According to the summary and from the less than two minute trailer online, One Shot takes place in 2034 when an humanoid gas-mask wearing alien race, the Cerulean, attacks Earth. Rallying together, the newly formed World Defense Force is the united front against the invaders and seems to operate from an rotating wheel space station command post. During a mission, WDF sniper Kyle Matthews is trapped in Cerulean territory and runs into a Cerulean woman that forces a choice on the Terran sniper. I watched the trailer and this a firm B-movie, but it is a rare example of an sci-fi sniper story with the Space: Above and Beyond episode "Who Monitors the Birds?" be one of the few others. With more of a budget and some more talent, One Shot could be an interesting story about an Terran far-future sniper tasked with killing an alien leader...like an alien Hitler or something...or even the general of the alien invasion force on Terra. This could be a great B Movie, like Slipstream, Hunter Prey, Dog Soldiers, or even The Outpost, I will watch it, in time, and review it for the blog. Who knows? It could be good! The sniper rifle itself appears to be an .338 Lapua Magnum AWM L115A3, used by British snipers and the aliens use an DE bullpup rifle based on the IDF TAR-21 assault rifle. From the trailer, I do believe that the Terran sniper rifle is an directed energy weapon.
Posted by William at 09:11