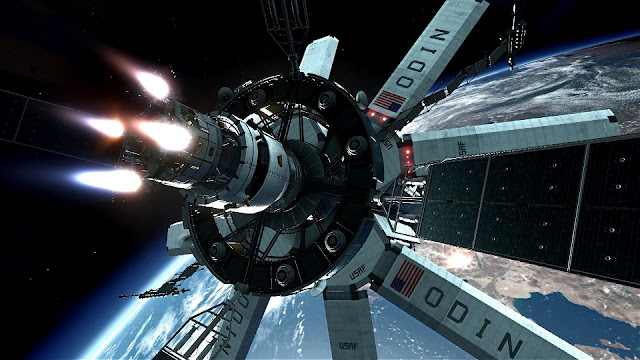 The single-player campaign trailer dropped today, and we lovers of military sci-fi got a real nice present from Infinity Ward...space warfare and rods from god! Fuck yeah! It seems that in the near future, the United States has an orbital defense system call ODIN that uses kinetic tungsten projectiles, AKA "rods from god". In the first few seconds of the trailer, a space station is attacked via space infantry launched from a shuttle bay just like in Moonraker, and this enemy hacks the ODIN space weapons platform, bombarding the United States from orbit. Over 20 of the largest cities in the US are hit from the skies by the incoming projectiles, causing the USA to go from superpower to 3rd world failed state nation in a matter of minutes. Thus, this is the world of COD: Ghosts and the playground for us. We've known for sometime that COD: Ghosts would be set in the future, but I was not expecting space-based artillery strikes and spaceborne astronaut infantry attacks complete with automatic weapons fire! This has me excited about the single-player campaign, and since Infinity Ward as a better track record single-player campaigns than Treyarch. I guess we shall see in November...man, I'm ready to game!