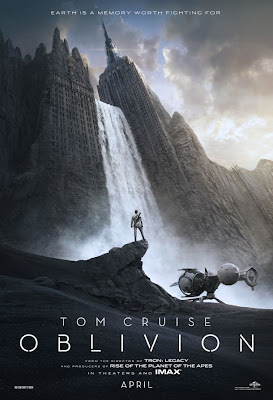 Here is the poster for the upcoming Tom Cruise big-budget science fiction epic based on the Radical Comics graphic novel and directed by Tron: Legacy's Joseph Kosinski. Tom Cruise plays Jack Harper, a drone repairman stationed on the abandoned and nearly dead Earth. He normally hovers above the surface, until a crash forces him to confront the grim changing realities on Earth. The graphic novel was a great book, and I really, really, hope that this movie is good.
It will be released around April of 2013.
Posted by William at 12:24