FWS News Flash: All You Need is Kill...First Image 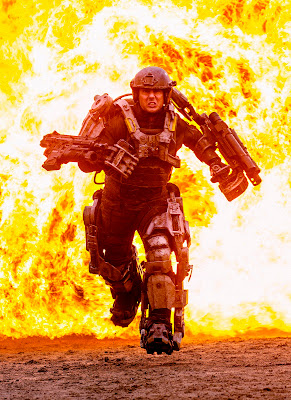 Wow...can you 1980's action shot? This is from the upcoming MSF film, All You Need Is Kill starring Tom Cruise as Bill Cage and based on the award-winning Japanese light-novel of the same name. All I can say is that is looks like shit. Where the hell are the Jackets, the armored power-suits, mentioned in the novel? Are we MSF fans going to get fucking robbed of our APS again (Starship Troopers 1997 movie)?! On a good note, some of the weapon systems mention in the novel are there...sort of...but this outfit some sort of placeholder for CGI SFX....or is this it? Really? That is the best they could come up with? This design is similar to some current prototypes of military powered exoskeletons, but they are more about enhancing a soldier's strength to carry heavy equip without the need of bulk vehicles, not for frontline combat duty. I mean, come on! There is little to none in the way of armor! And besides, how the hell are suppose to swap out the magazines in the assault rifle pinned to your forearm? I was excited about this film, but now I'm unsure. I just hope the SFX is better for the aliens, the mimics than this thing. Damn, I thought this would be good...