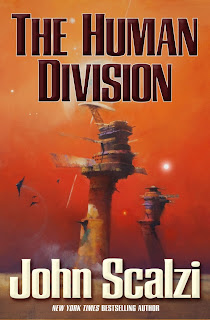 John Scalzi's superior MSF novels are back with the Human Division due in December of 2012 if we are not all dead or fighting Zombies that is. Tor books is experimenting with a new idea in publishing, by making the fifth book in the series being closer to a old-style serialization online, much like books like I, Robot were in the Golden Age of Sci-Fi. These episodes of the whole will run through February of 2013, then will be packaged up into a real printed book in stores and as a e-book download. According to Mr. Scalzi's own blog, the first installment will be titled: the B team and Mr. Scalzi also stated that his story after the coup would be helpful to the reader:

The new look of OCP from the ROBOCOP remake! 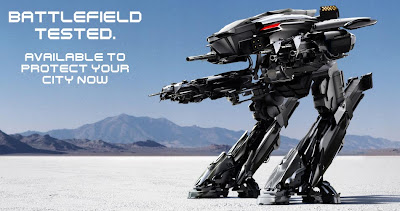 While I think that Starship Troopers and Judge Dredd need and deserve a reboot, the 1987 Robocop is fine the way it is. However io9.com has put up the latest images for the film's reboot of the OCP corporation's automated law enforcement creations. In the original film, the ED-209 was automated law enforcement and military robot designed to take over the bloody streets of Detroit ( which looks more and more possible!). Here it seems the new systems are ground and aerial based. The aerial unit is called the XT-908 that seems to be an enhanced UAV. The new ED-209 is an actually military deployed UGV system that is re-purposed for urban LE duties. According to the OCP advert on youtube, the new ED-209 uses 12.7mm machine guns, hellfire missiles, and something uses called 'reactive graphite armor'.  The ED-209 is much larger than before, dwarfing an M1 tank! I had my doubts before about the reboot, but now, I think I am warming up to the idea, much like the new Total Recall.

The Big Robots of Pacific Rim!﻿ 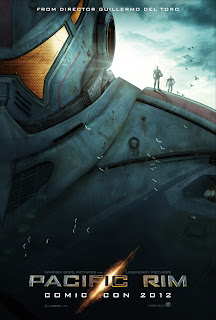 Director Guillermo del Toro new flick is called Pacific Rim and pits giant robots called 'Jaegar' against monsters called Kaijiu that have destroyed other manned robotic warriors. The plot is pretty typical, where two pilots of this mecha, were one is a seasoned hard-boiled vet, and a newbie ban together to save the world. No word if these monsters are the ones from Cloverfield or if Godzilla will be making an appearance.