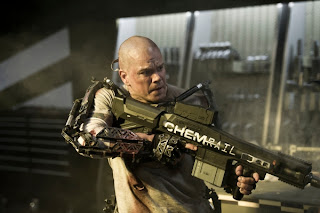 It is no doubt that Neil Blomkamp is one of the most talented directors working today, and we are finally getting another science fiction tale from him that features Matt Damon, Sharlto Copley, and Jodie Foster in the year of 2159. The basic plot of the movie has the super-rich abandoned the sick Earth for a Stanford Torus designed space station in GSO called Elysium. Prices for citizenship packages start at one billion dollars, allowing for the few to leave the many behind to die slowly on the polluted planet below to live in paradise. 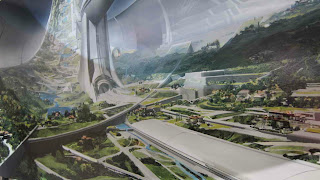 This  setup reminds me of the first episode of the old NBC 1994 sci-fi show Earth 2. Matt Damon plays Max, a man with a portable rail gun rifle mounted to an exoskeleton designed to adsorb the recoil and sent on a mission to Elysium who will die in five days. We will seem what the world of 2159 is like on March 1, 2013 and the director has confirmed that NASA helped with the design for Elysium. So, Neil, where the hell is my HALO movie?