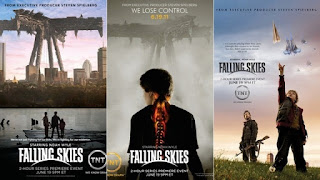 Some time back, FWS published a list of upcoming military sci-fi works, among the most exciting to me, was the TNT big-budget Falling Skies starring Noah Wyle and Moon Bloodgood. The series looks like a cross between Battle of L.A., Jericho,and War of the Worlds.
The story is of a conquered Earth, subjected to an alien occupation force that is interested in captured children alive. Falling Skies takes place six months after we got our collective asses kicked via the aliens using a massive EMP that takes down our advanced technology, and Noah Wyle's character, a history teacher (like me!) is leading a band of resistant fighters that protects a small community of survivors. 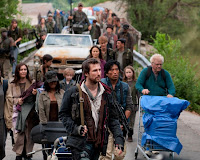 io9.com as an early review of the first seven hours of the series. From the article on io9 states that the alien overlords and their relationship with the captured children is down right creepy and the alien themselves are interesting.
I think this series could be bold and ofter something different to the science-fiction landscape, however, it could be like Jericho and never find an audience then die slowly...despite the tons of nuts.  Since V on ABC is going to be canceled and took the teeth out of the Visitors, I am hoping that Falling Skies producers watch and learn. Having a series closer to the emotions and feel of the excellent 2005 Tom Cruise War of the Worlds rather than V should give the series the push to be more realistic and honest.
The main worry with a series like this, is that it does depress the audience too much, reminding them too much of September 11th, and not having enough story to make a series...there cannot be us battling aliens every week...the series producers need to look at Battlestar Galactica for pacing of the combat scenes. Also, don't build up the mystery to the series then there is no way that the writers can create an answer worth of the hype...yeah, LOST I'm frakking looking at you and all those years I wasted on you! And you too, X-Files!
Here's the link: 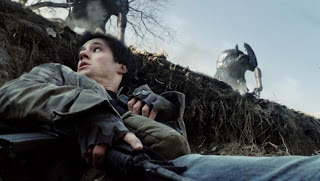 http://io9.com/#!5798573/life-under-alien-occupation-is-one-scary-heartbreak-after-another-in-falling-skies
Posted by William at 11:09