io9.com just posted a link to Battlestar Galactica Series Bible, written by Ronald D. Moore on 12/17/03, just after the miniseries and before season one. Here is the link: http://www.harvardwood.org/resource/resmgr/hwp-pdfs/battlestar_galactica_series.pdf 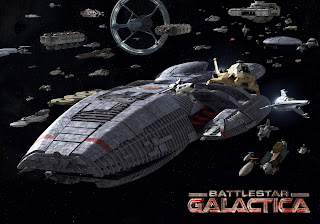 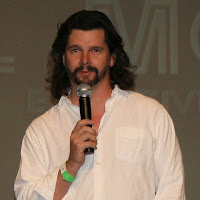 Upon reading the BSG bible, you get a sense of Mr. Moore trying to distance himself from two realities, Star Trek and the classic 1970's BSG. According to the text, Moore wanted to get far, far away from the common theme of "weird space people", in favor for "present-day American society." Then he attacked the alien races in Star Trek that possessed the ability to break the laws of physics, eat whole planets, and screw with time-travel. He want to making sure that the writers of the new BSG DID NOT mimic the Borg to make the Cylons. He, also, did not want a new alien race to be encounter every week (cough Voyager, cough) that looked human with nose-makeup.

There is a line about the mix of technological levels onboard the old battlestar, which was an defense against the Cylons hacking skills, and Moore says that it "forced" human beings to more involved in their technology, and not relay on the machines to do the work. Which reminds this Sci-fi geek of the society of the Dune books with the Butlerian Jihad, Mentats, and the Spacing Guild.

Moore wanted Galactica to be more akin to a Nimitz class than a Galaxy class, with all the grim dirty  reality of living on a space-going combat aircraft carrier that could also be a semi-battleship...but he states that the fighters are the "real punch." With the tie between Galactica and the Nimitz is strengthen by Moore wanting the launching and recovery of Vipers not to be common place or easy, that there were many steps and manpower burning calories to drag a Viper starside. 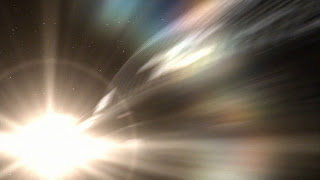 Given all this hard reality, he makes allowance for the presence of FTL technology, and he fully accepts that it is a "handwave" to the real laws of our universe, but he deals with the FTL systems being limited and a point-to-point jump, not a cruise through subspace with pretty stars drafting by. In Star Trek, warp speed appears easy, and common place, where, if you or I was onboard the Enterprise than we could plot a course with no issue. In the BSG universe, jumping into an explored, and charted system is risky. But once Galactica jumped beyond the Red Line, they were in uncharted waters. This makes FTL jumps whole different matter. Take a unknown system that is 5 LYs away that they are going to jump to...this causes telescopes to be used to determine the behavior of the planets and other bodies in the system, and then, by the miracle of math, they calculate the change in the star system over five years. Then they cross their fingers and jump. This means that a fully trained staff had to be working on jump coordinates all the time for emergency FTL for the entire fleet (just re-watch "33" and think about this!).
I guess, Math classes are more serious in the 12 colonies!

In the history section, he mentions, that it might be a recurrent theme for the abandon of technology to "reboot" the civilization. Which, of course, happens. I have always wondered when Mr. Moore got the idea for the ending... 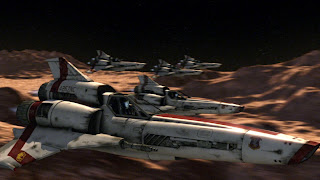 One thing I enjoyed about Galactica that is mentioned in the Plot-driven Stories section, is that the galaxy is a empty place mostly, that habitable, atmospheric-standard worlds are very, very rare, and most worlds are balls of rock, ice, and gas. More over, he stresses about  not "retread of various sci-fi cliches of the genre", he lists examples of seeing dead family member that are really aliens or a virus, time travel, evil twins, multi-universes and so on. Some people online have mentioned the lack of battles in BSG. Moore address these rare hostile and violent encounters between the fleet and Cylons. This, I believe, came from the classic BSG, where the Cylons hit the rag-tag fleet nearly every frakking episode, and it seemed not a big dead when the pilots went out and came back. He, instead, wanted the viewer to smell the realism of the desperate combat and situation, where every Viper pilot dead was a huge loss, and their machine broke down with few spare parts, and there was no replicator. War in space was a cold unforgiving hell.
Then this brings us to the real change that BSG made over the vast majority of sci-fi series, showing real people with real problems. Unlike Star Trek were people had overcome greed, money, and drank synthehol, Moore wanted Galactica to show the reality of real people, and then he mined post-September 11th-America for ideas..."Our show is, first and foremost, a drama. It is about people."
This is a great read about the best science-fiction ever made...enjoy.
Posted by William at 21:48