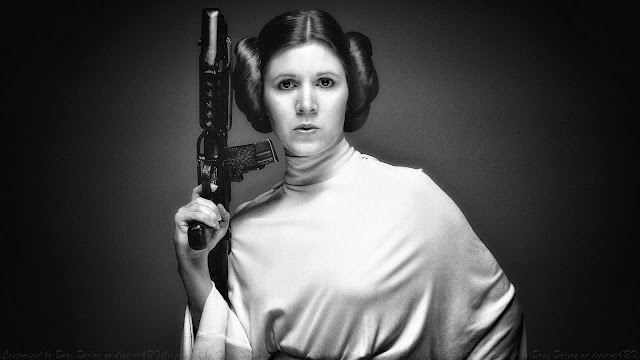 Once again 2016 has to proven how much of a bad year it has been by taking yet another one of our beloved stars, and this time it was a titan of Science Fiction: Carrie Fisher. At age 19, Carrie was given a starring role in an unlikely successful film that not only rocketed her to international stardom and notoriety, but her role as Princess Leia altered the way women were portrayed in sci-fi/fantasy forever. Without knowing it at that time in 1977, Fisher's role as a princess, senator, rebel leader, and future Jedi would be celebrated and serve as an inspiration to women in the years to come. Princess Leia is one of the most iconic and well-known female characters in all of science fiction with endless amounts of figures, art, coplayers being forged in her image, thus ensure her immortality. Without her, there would be no Commander Shepard, no Kara "Starbuck" Thrace, no Captain Janeway, and no Honor Harrington. Moreover than being the woman behind the iron bikini, Carrie Fisher had another iconic role in one of my favorite movies: The Blues Brothers and was a well-respected author that shined a light onto her own struggles with mental illness, drug addiction, and recovery via interviews and books. This exposure and breaking down the walls of mental illness and drug addiction has made Carrie Fisher an inspiration to those in recovery. During my job at an in-patient drug rehab unit, Carrie Fisher’s struggle and recovery was used in treatment as well as her book Postcards from the Edge was an approved book in our client library. Taken at age sixty, Carrie Fisher still had much to do and to give. She will always be remembered for both a princess and a pioneer in our hearts.
Posted by William at 13:29