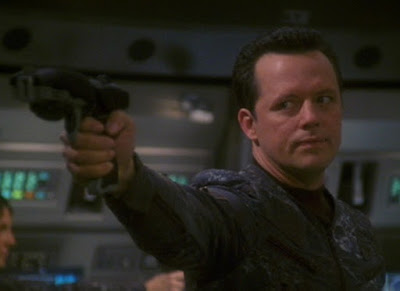 News broke this week that Paramount President Marc Evans, during an interview with WIRED magazine, said that Paramount is exploring the possibility of  Trek themed stand-alone films, like Star Wars is doing with Rogue One. In the interview, Evans wonders what an Star Trek: Zero Dark Thirty commando movie would look like. This is amazing news, because we've never had an military-themed Trek film and to see one that might answer the basic question of the existence of the mythical Starfleet Marines! I wonder if Evans is referring to the MACOs, only Special Forces unit we've ever seen in Trek? This connected universe film of the Trek universe could allow us to see more of the galaxy than just the Federation and Starfleet...could we get an Klingon movie? Of course, the real question is would this military-themed Trek film or other connected-universe films be set in the mainstream universe or the new alternative universe laid down by J.J. Abrams? Those new films are so limited in the presentation in the wider universe, but would mining the old original timeline be confusing to audiences and Trek fans? All of this is just speculation at this point, but the mere possibility of seeing an Trek commando film could be very exciting!
Posted by William at 12:56