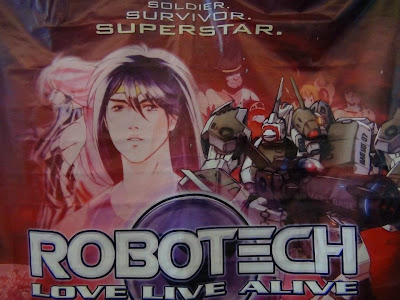 It seems in late 2012 or early 2013, Harmony Gold will be releasing a new ROBOTECH movie! The title is called 'Love Live Alive' and will take place in the post-REF operation to liberate Terra from the Invid. The main characters will be Lancer, Sera, and Rand has been mentioned. Given the title, will Harmony Gold be following it's classic pattern of using original Japanese animation but replacing the dialog?  Love Live Alive  is nothing new to fans of Genesis Climber MOSPEADA. In 1985, after MOSPEADA was cancelled, the studio, seeing cult success of the TV series, came out with a flashback/music video movie that featured new animation mixed with old. The story centers around Yellow Dancer/Lancer touring the countryside in his Cyclone mecha, and finds a ruined city with a music stage. In this city, Yellow Dancer puts on a concert, gathering survives of the Invid horror, including old friends. 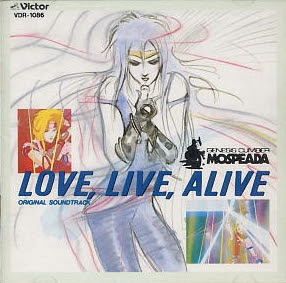 So, is this new ROBOTECH work a re-dub of the 1985 OVA? Rumors around the ROBOTECH sites have said that it the American production will mix new animation, in the style of the Shadow Chronicles, with some plot elements of the original Japanese OVA film. There is talk of actual footage of the SDF-2 and it destruction, along with Dana Sterling appearing in some role, possibly during her involvement during the Invid Invasion. Word around the campfire is that most of the original voice actors will resume their roles, and this could be seen has rounding out the third generation of the Robotech Wars. Is this a good thing for ROBOTECH? Maybe. This could be very cool if Harmony Gold makes a flashback OVA with fresh footage of the things that ROBOTECH fans have been wanting to see for decades, like the SDF-2. But why is Harmony Gold wasting time, money, and talent on this project? We have the Shadow Chronicles and the Sentients that could use the attention, not some recycled 1985 music video OVA that gives the fans little in the way of something bold for the ROBOTECH universe. But I'll watch it because it is ROBOTECH. Sigh.
Posted by William at 21:19