io9.com just broke the story that Old Man's War by John Scalzi is being developed for the silver screen! At the moment, the screen-writer is David Self, who wants to turn the book series into "into a large-scale science fiction project." Old Man's War  director will be none other than Wolfgang Peterson, who directed one of the earliest MSF movies, Enemy Mine. 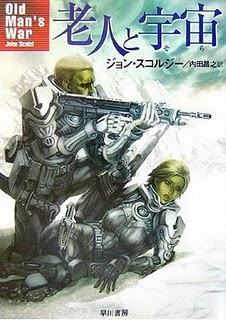 What does the ever opinionated author of one of the best MSF novels of all time say? Here is the quote from his blog:
"Yes, I'm very happy with the team putting it together. I've been an admirer of Wolfgang Petersen's for a long time now, both as a director and as someone whose films do great business here and abroad, and I think he's a very good fit for Old Man's War. Scott Stuber is likewise a very smart and savvy producer, and someone who knows how to shepherd a film through the process right to the big screen. Screenwriter David Self has done some great work adapting material (see: The Road to Perdition), so I was very happy to hear he was operating on my work. I'm also very pleased to be at Paramount, who knows their way around making, marketing and distributing very large science fiction and adventure films. Basically, a good fit all the way around."

Given the comments by David Self and that the Old Man's War universe as several books, it could be assumed that there could be a series of movies, but Scalzi rejected that with this odd comment on his blog:

"As a practical matter, the rest of the books in the series should be understood to be off the table"

With Old Man's War and The Forever War both being made into movies, it looks the future of military science-fiction is going to be very bright in the years to come!

Of course, FWS will follow any development in the  Old Man's War movie.
Posted by William at 22:03