FWS is always googling to stay on top of the latest in MSF. Here is what is going on:
Battlestar Galactica: Blood & Chrome Ron Moore is working his frakking magic again, and making a web-series of the 1st Cylon War...similar to the web series that ran with Razor. Moore as said that if SyFy channel likes that then the possibility of a full-TV series. From the Razor scenes of the 1st Cylon War, B&C will incorporate more elements of the classic BSG 1970's series. The world does need more BSG!
Earth Defense Force

Sam Raimi is in development of a big budget alien invasion movie tentative titled: "Earth Defense Force". The barebones plot as Earth suffering a massive defeat at the hands of an alien strike force, and Earth as 10 months to ready for a full scale invasion. It seems that alien invasion stories are all the rage, and this one as some elements of the Xend storyline from Star Trek: Enterprise and Space Cruiser Yamato The Great God of film (AKA Ridley Scott) is in deep development for either one or two ALIEN prequel movies. LOST writer Damon Lindelof has turned in a script that will make a PG-13 film that is 35 years before the events in ALIEN. Rumors have Natalie Portman up for a role as a Colonial Marine General. The real issue with this film is what could it be about? Will this movie finally answer the question of the Space Jockey ship on LV-426? Is this about the Company originally learning of the ALIENS species? 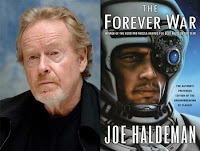 The Great God, Mr. Scott, is involved in bring the Forever War book to the silver screen in 3D. The rumors say sometime in 2012-2013, but problems with the script have put a delay on it...Blade Runner writer David Peoples wrote the first major script that followed up by three more by different writers. Reportedly, Mr. Scott as had trouble figuring out how to bring the passage of time at different rates into a workable script. Once again, God needs to look at the 1990's graphic novels...

On November 16th, the second Avatar DVD will be released on a box-set of three discs with three versions of the film, plus all kinds of extras. This includes the longer 16 minute verison with the opening on polluted Earth, showing Jake drunk at a bar and the conditions on Earth. The regular DVD set will feature less than the Blu-Ray version...I expect this to be packed with extras in a way similar to the Blade Runner five-disc version. Note that Mr. Cameron will be releasing the regular threater cut, the eight-extra minute verison that was see on a limited release in August, and the sixteen minute verison that the Earth portions. I loved Avatar and plan for this to be on my Xmas list...but three verisons of the film seems wasteful.

Sharpnel is a line of MSF comic books from Radical. The story of a pan-solar system civil war over Venus  adds some Gattaca-type genetic racisim thrown in along with very cool armored power suits to boot. The series have met with great reviews and enough success to warrent another comic series. The story is being made into a video game by Zombie Studios, with  movie in development with Len Wiseman. If done right, this could be a sega of MSF excellence!

The 1970's anime epic space opera known as Space Cruiser Yamato or Starblazers is getting the big screen treatment...in Japan. Several trailers have been released allowing us, American Yamato fans to see a new Battlestar Galactica-type movie with very good SFX and some dead-on set design. I am very happy that the Japanese did this one...and rumor as it that it will be release in the USA. Oddly, the Gamilion aliens of the series are missing from any of the trailers. Will the Gamilions be the blue-skinned human like aliens or something else...

War of the Worlds reboot with Mr. Cruise in it is one of my favorite alien invasions films, and it nice to see one being developed through a MSF lense where US Marines fight an alien invasion on the streets of LA. Only several seconds of footage have been released along with gritty set photos. It looks to be a great movie for 2011!

Steven Spielburg will be producing a TV series on FOX of Earth in  2149 AD where temporal colonization of Earth's past to deal with massive ecology collapse. The colony comes under attack from Dinosaurs with rumors of soldiers fighting the dinos (Turok anyone?!)....I do not know about this one...reminds me of NBC's 1994 failed series Earth-2.
New Orphan books

Robert Buettner's excellent MSF Orphan series will have three more books coming out in March of 2011 from Baen Books. I am, at present, reading this series, and finding it to be a great MSF book series. Orphanage is not to be missed!

To most people, the HALO series ended with HALO-3 and HALO: REACH, and Bungie Studios has gotten out of the HALO business. The future of the series is being handled by 343 Industries. Rumors of job posting from 343 on level designers for a new HALO game are all over the web. While Tor books have a sequel to the Ghosts of Onyx,along with a Forerunner trilogy coming out. Marvel Comics is coming out with a HALO: Reach comic book adaptation. Will there be a HALO:4? Soon, FWS will be presenting a HALO flash fiction series, with a possible storyline for the future of the Chief and Cortana. 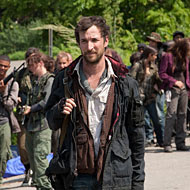 TNT as picked up the alien invasion series Falling Skies starring Noah Wyle and produced by Steven Spielberg. This is a post-invasion story about a resistance movement to the alien overlords...coming out in summer of 2011. The series has some serious talent and set photos remind me of CBS Jericho. 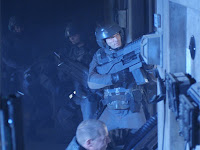 Recently, rumors hav been running around the Internet say that SyFy is going to make a Starship Trooper miniseries based on the 1958 book. While other rumors say that a fourth movie is coming that will be a continue the Marauder storyline. Time will tell.

The 70 minute official produce of Games Workshop movie based on the Ultramarines chapter of the Imperium of Man Space Marines. This will be all in CGI supported by some big voice talent, and appears to retain the dark air of the WH:40K universe. The film will be released on Nov.29th of this year...but from the trailer it seems like a 70 minutes game trailer. We shall see though...
"Smokers"
The FOX network is developing a sci-fi series about people "exterminating" aliens in deep space from the POV of a film crew documenting it. Okay, FOX cancelled Firefly and Space: Above and Beyond...and this looks a blink-and-miss-it sci-fi show...I see FOX making the series either a dark comedy (like Firefly) or dead serious series.

This is British Fan HALO made movie that as a budget of $60,000 and features a Warthog built on a Land Rover! The plot centers on a mission by marines on Earth against a crashed Covenant cruiser. For the work on the Warthog and the gun props, Operation: Chastity could be the movie that Bungie would not make, but should have!