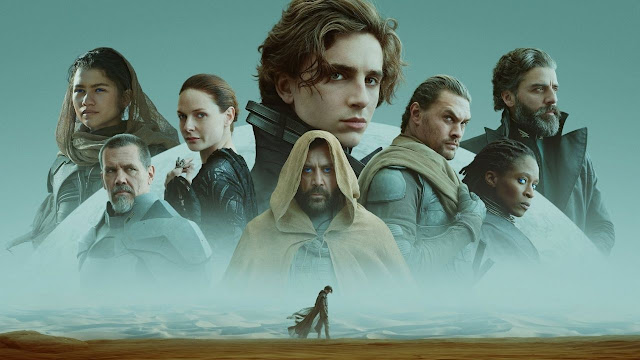 DUNE has been considered by many to be one of the finest works of human imagination and since being published 1965, the world of DUNE has been a special place for millions, including me. Since the 1970's, there have been several major attempts to bring DUNE to the big and small screens with a film finally coming in December of 1984 and the Sci-Fi Channel Miniseries in 2000. Only one other DUNE title has been brought to the visual media with Sci-Fi Channel Children of DUNE miniseries in 2003. Both have been marked by odd production, casting, and theme choices. DUNE is a hard book to bring to screen due to the complexity of the subject matter and the universe. For years there have been rumors and failed attempts of another DUNE production. Finally, the man and mind behind the epic and heartbreaking BLADE RUNNER: 2049 was given the helm to ride the worm and bring DUNE to the 21st century audience with a stellar cast. As a DUNE fan since the 1980's, I was beyond excited to finally have another DUNE movie besides the oddity that is the 1984 DUNE. I witnessed DUNE 2021 at an a Dallas IMAX theater on November 3rd and here is the FWS review:
The GOOD 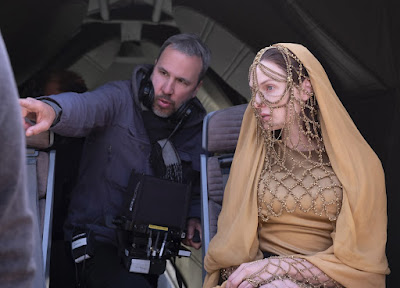 To best sum it up in two words: Denis Villeneuve. DUNE showcases, to us, a wonderful visionary filmmaker that loves the source materials can do to bring a beloved sci-fi classic to the big screen in a way that is pure escapism. DUNE 2021 is beautiful, emotional, loud, brutal, and captivating filmmaking that visually and sonically blows the doors of the 1984 version. This is thanks to some of the rich DNA of BLADE RUNNER 2049 being injected into DUNE 2021 along with improved scale and scope of the world of DUNE forging a grand adventure worthy of the words of Frank Herbert. One of the cool elements for a DUNE fan is that 2021 film includes the visions of Paul's possible paths of destiny, the battle languages, the desert mouse, the coming Jihad, the seed myths of the Sisterhood to the Fremen, proper ornithopters, and even the Still-Tent! Then there is decision to break the book into two films, which was a smart move to allow the unfolding of the story and the journey of Paul Atreides into Muad'Dib with the gift of time.

Several highlights for me was the kinetic brutality of the knife fights, the way that Fremen are shown as killer ghosts of the sands with Arabic themes and style, the improved personal shield special effects, the look and feel of war among the great houses, and the 2021 film's take on the Harkonnen, the Guild Highliners, and the Sardaukar. Another strong element was the improved threat of the looming sandworms that are moving just under the oceans of sand on Arrakis. This was stated in the book, but this film finally demonstrates the power, speed, and horror of the old man of the desert. Speaking of the desert, I do not know where they filmed the open desert scenes, but it looks like an alien desert world to the degree that I half-expected Matt Damon to come into the shot in a spacesuit. This film captures DUNE and it has been a long time coming for us fans and the next generation of fans. 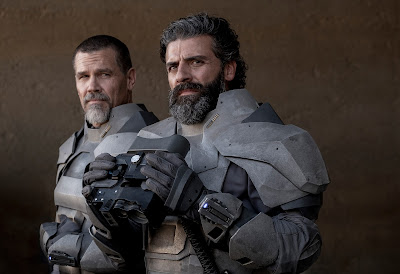 The opening to DUNE 2021 is very odd compared to the other productions. It shows Chani's tribe attacking Harkonnen spice mining with Lasguns and it allows us to hear some voiceover by Chani to introduce some of the DUNE universe and how the combat of DUNE will look, but it is out of place and gets DUNE 2021 off to an odd start. Connected to this is the way the scenes are linked together, which in most cases is they are not linked together causing the pacing & flow to be off for me. Another element that was off was the look of Arrakeen. It does not look like a city and more like a futuristic citadel that belongs in another film. Then there are some of casting choices in this film: Jason Momoa as Duncan Idaho, Josh Brolin as Gurney Halleck, and Chang Chen as Dr. Yueh. 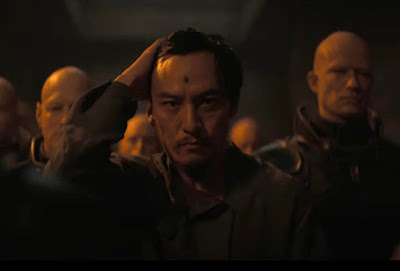 Okay, no work outside of the Sci-Fi Channel DUNE Miniseries has been been able to breath life into Duncan Idaho and Gurney Halleck characters in the way read in the pages of DUNE. When compacting the beginning of the DUNE story, these characters are lost in both the 1984 and 2021 versions. However, while Jason and Josh are good actors, there was just something off about their portrayals of their characters in a way that I cannot explain fully. Then there is Dr. Yueh. He is a critical character of the DUNE universe due to his betrayal of House Atreides causing the downfall of one of the great houses as well as the death of the Duke and thousands of Atreides. In the 1984 film, Dean Stockwell gives the character life along with more foundation for his horrible actions. That does not exist in the 2021 version and the actor does not bring the character to life or even out of the shadow, harming the overall story. 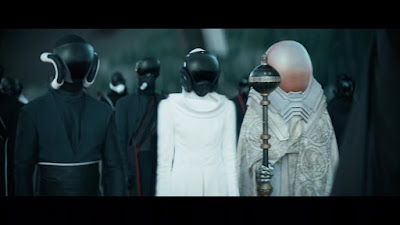 As someone who has read the six-book series several times, the world that Frank Herbert created in 1965 is a masterclass in worldbuilding and DUNE is a rich universe of galactic politics sex, murder, war, religion, power, combat, ecology, and drugs. Shame that nearly none of that universe was in DUNE 2021. The elements I mentioned were all there in small scale, but without the epic scale of the universe of DUNE to frame them. This film is like a beautiful meal that is served on a tea dish. Nothing is mentioned of why and who the Mentats are, we do not see the Emperor, the Spacing Guild (who look like Daft Punk in this film!), the Butlerian Jihad, the lack of thinking machines, and even the spice itself.

Sure, there are references to all of this in the filmbook scenes, but there is no weight to the words and the world of DUNE 2021 seems to orbit around three worlds in the vastness of the Imperium. Oddly, these elements of the wider DUNE universe are there in style and look, but not in words and actions...like they are waiting for the next part of DUNE. Simply put, DUNE 2021 needs to be enjoyed by audiences that are already familiar with the DUNE universe, because this film does not give you really anything and this could hurt the ability for the 2021 film to mint new fans to the series. The 1984 film was how I was introduced to the world of 10,191 and it served as my imagination foundation for the world of DUNE. I've seen the 1984 DUNE over a dozen times and in all of the major cuts of the film. I think it is only right to compare the 2021 film to the 1984 original. For some of the major characters, like Lady Jessica, Paul, Chani, and Duke Leto; we have much talent in both films and what is interesting is that the actors take different angles on the characters. The Lady Jessica is more like a mother to Paul in the 2021 film than in the 1984 film with the 1984 Lady Jessica is more Bene Gesserit with the calm appearance and emotional control. 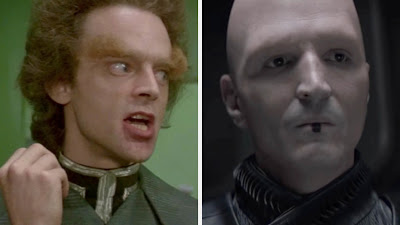 This applies to Duke Leto, who is more like a father to Paul than the more royal Duke of the 1984 film. Both films have issues with bring Duncan Idaho and Gurney Halleck up to their roles in the book and both are searching for their moment. The new film has a more fleshed out and active Duncan Idaho than the 1984 take, while Gurney Halleck is more angry without the soul of Sir Patrick Steward's version. Paul and Chani are closer in appearance to the characters of the book than in the 1984 film. What is ironic is that Kyle MacLachlan was 24 during the filming of DUNE and Timothee Chalamet is 25. Both actors are good as Paul, but Dave Bautista, David Dastmalchian, Javier Bardem, and Stellan Skarsgård kill it their respective roles in the film. Both films have amazing designs that show the world of DUNE in different way, but the Ornithopters in the 2021 film are stunning and feel very real, causing them to be one of the best designed fictional aircraft of all time. The Freman are a real highlight here and they are very much closer in the book in the 2021 film by far. 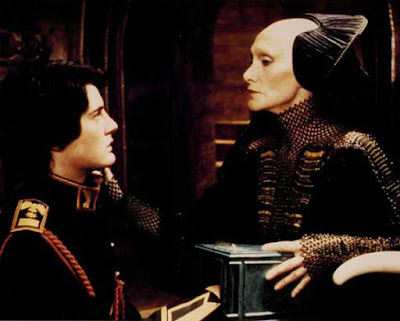 However, there are some major differences and some where the 1984 film is superior to the 2021 film. The design of Arrakeen is far better in 1984 than 2021 along with the Spice Harvester, but these are minor. There three scenes that were in the 2021 and 1984 films that we need to discuss. The scene with the Gom Jabbar in 1984 is much better by far with better acting and presentation. This is also true of the scene where the Duke and company are rescuing the crew of the Spice Harvester during the worm attack. The 2021 has superior SFX and is closer to the book, but the fire and command of  Jurgen Prochnow's Duke Leto is very superior in that scene and fills the cockpit of the golden Orthinopter beyond the limited SFX of that time. After the plot is unfolded and the attack successful placing House Harkonnen back in command of Arrakis, the Baron is confronted by a drugged Leto with a poison tooth. The original 1984 scene is much better in terms of power, emotion, and creepiness. Part of this is likely due to the actors playing Dr. Yueh and it is clear to me that Dean Stockwell is superior in the role. Of course, the 2021 Dr. Yueh part is much more cut down than the 1984 or the book.
Should You See DUNE 2021?

You're still here?! GO! Go see this movie in the theater in IMAX and be delighted in a masterclass of filmmaking and escapism. It has been a long time coming, but we fans of DUNE finally have a movie worthy of the words of Frank Herbert.