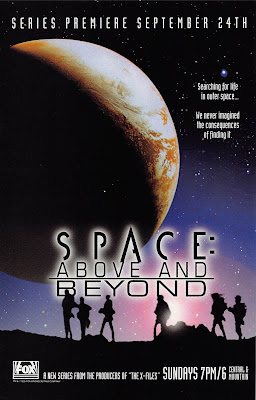 On September 24th, 1995, the best Military Science Fiction TV series of all time was aired on FOX and it changed how I viewed the genre of science fiction. When the show aired in 1995, I was a college freshman working at McDonald's and had to set my VCR to tape the pilot 2 hour episode. However, the Dallas Cowboy game ran long by over half-an-hour making me missed the Battle of the Belt. I did not even see that part of the pilot until I bought the series on DVD in 2005! It did not matter though, I deeply loved this show from the first episode and greatly missed over the years. While I wished that some elements had been ironed out or treated differently, it was an amazing experience that put all other military-themed sci-fi TV shows at the time to shame...especially when DS9 attempted to show a war (B5 was nearly as amazing though). It floors me how much my life and the world has changed in the last 25 years, but my love for SAAB continues just as strong to this very day. I hope in another alternate reality that SAAB got a few more seasons and the cliffhanger was resolved.
Wildcards forever!