It seems like the favor-of-the-month for Special Operations units is the US Navy SEALs and their once secretive TIER-One Special Warfare Group: SEAL Team Six. For many years, the Navy SEALs were known about by some in the general public given the infamy of Richard Marcinko, but it was largely eclipsed by DELTA Force and other units in popular media. That altered with the War on Terror, but dramatically rose when DEVGRU Operators pumped 556 into number-one-shitbag UBL in Pakistan in 2011. An explosion of  NAVSPECWAR video games, books, films, TV programs soon followed, packing the collective consciences of the world with deeds of the elite Frogmen, but with some mixed results. The subject of today's FWS review is the 2013 graphic novel that was very much a product of that explosion of interest in Naval Special Warfare, but it fused the iconic Akira Kurosawa's Seven Samurai film with the conflict in Afghanistan, starring Special Operations of the Navy and Army instead of Ronin Samurai: Rubicon. Published by Archaia Entertainment in 2013, Rubicon was sold by the publishers as a retelling of the Seven Samurai story through the modern war in Afghanistan with American Special Operators defended an Afghan village from the Taliban. Heading this project was a team of talented creators with input from a former founding ST6 Frogman. Originally envisioned as a film, it was translated in a graphic novel to push for a major studio.

The Plot of Rubicon

A Toyota Land Cruiser FJ60 pulls into US military forward operating base Troy and is let in based on the driver being a known translator for the people working out of the base. Moments after entering behind the wire, the driver bolts and the Toyota explodes, killing several, including a SEAL Team Six Operator named Big Mike. Back in Virginia Beach, Virginia, an ST6 team leader named Hector is attempted to enjoy family time after his most recent deployment when word comes down that one of the Frogmen in his team has been killed in A-Stan and they are spin up for an operation in-country. This news rips him apart from time with hs kids, his ex-wife, and his hot new girlfriend. Hector's team has been ordered to investigate just what the hell happened in that valley. Once in the country, the five-man ST6 team captured the Taliban would put the translator up to bombing FOB Troy. The SEALs roll into the village and turn over the bloodied prisoner to the father of the man killed. Putting the village into the debt of the SEAL team. However, the Taliban man is let loose by the village, and he warns of a great retribution when he returns. At the FOB, the SEAL teams met two US Army SIGNET intel guys with the language skills and no combat experience. It is there that the seven American Special Operators decided to protect the village and kill the Taliban. 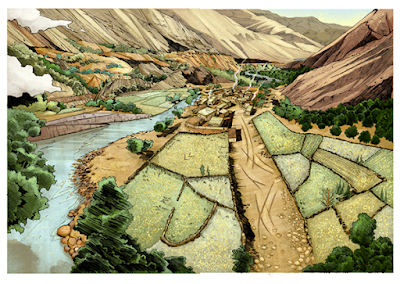 As far as concepts go, Rubicon has one of the better plots of modern military war comics, and it mining the best Samurai film of all time does not hurt either. It is also oddly compelling and there is something special there that has made me return to it several times since I bought it in late August. One of the best compliments I can bestow on Rubicon is that I picked this graphic novel out of a bargain bin at a Houston Books-A-Million and even after flipping through the  graphic novel, I still bought it. The fusion of Seven Samurai  and Special Operation in A-Stan was an intoxicating mixture that propelled me to slap down my cash and take it home. At times, the graphic novel really comes together and delivers on its promises, especially when focused in on Hector, the leader of the Motley crew of SEALs. His challenges with leading a team of expert badass door-kickers and having an active role in his own life back home are spelled out in grim detail. as seen above, some of the art is excellent, especially when it comes to landscape and the vehicles.

An idea can only carry you so far, and it is up to the manifestation of that idea into a hard product that counts on the grand scale. While Rubicon is an amazing idea that would fit well into the other western visual interruptions of Seven Samurai, it is flawed at nearly every turn, and the excuse that is given by the creative team is fucking lame. Errors in page layout, dialog, gear, and how military operations are untaken are the “death by a thousand papercuts”of Rubicon. The battles are confused and worse of all. the production team took lifting ideas from Seven Samurai too literary for the graphic novel’s own good. This is best exemplified by the relationship between a beautiful Afghan village girl and one of the Army SIGNET intel guys. This just would not happen and has not happened in the real world. There is also the matter of the badass bearded operators being ST6 guys. Why? The situation in the graphic novel does not lend itself to the notion of a serving military unit behaving in that manner. No DEVGRU unit would go on mission like that. The situation presented in the graphic novel would be more acceptable if it was involving Private Military Contractors. This would be more inline with original Japanese film that used masterless Samurai (Ronin) to defend the village. The last bad element was the excuse given by Mark Long in the back-page interview. They said that several known issues in the graphic novel were not fixed due to scheduling deadlines. That is a tired excuse and I'm tired of it. The publisher of this graphic novel, Archaia, pushed for this to come out and the resulting unevenness cost Rubicon from being one of the best modern military war comics in more than a decade to a bargain bin find.  How that work out for you, Archaia? If this graphic novel was indeed rushed, as claimed, then it only hurt the long-term plans of the creative team to turn the graphic novel into a major motion modern military film, akin to 13 Hours or Tears of the Sun. That did not happen due to the lukewarm reception of Rubicon.

We all know the phrase "art is subjective" and to some, judging work based solely on its art is too subjective to warrant merit. I disagree, and Rubicon is a perfect candidate for its art style and direction being the Ugly of this graphic novel. It is not just that the art is "bad", it is that it is uneven as hell. That are some panels that are simply beautiful with beautiful Afghan visas, highly detailed Toyota FJ60 Land Cruisers and Hilux pickups, and stunning naked tattooed ladies. Seriously. Then there is art that gifts us with chunky, awkward human forms, battles, and howler monkey faces that make me itch when compared to the good art. Some of the characters appear as rough Operators with scars, beards, tattoos that make them every bit of the tactical beard badass Operators. Then the angle is wrong, and these DEVGRU Jedi Knights appear more simian and hulking lumps of tactical gear and weaponry or foolish jokers.

Rubicon is a nexus of the ideas, talent, willingness, and time that could have been an opportunity to transform Kurosawa's iconic film into a modern warfare setting. Could have been the object term. This is the deeply painful final assessment of Rubicon, it is flawed on a fundamental level that strikes deep into the basic foundations of this graphic novel. While Rubicon is interesting, it deeply vexes me how this small comic publisher could take this wonderful idea and get it so wrong for no good reason...the nexus of positive elements was there and yet, it could not be realized. The bottom line on Rubicon reminds me what the Oracle said to Neo in the first Matrix film about him having the gift, but it looks like he is waiting for something, like his next life. That is the final assessment of Rubicon, it is waiting on its rebooting that hopeful will live up to the promise of the idea. The real shame of the graphic novel for me is that I really wanted to like it and I just could not get over its many errors and flaws. Reminds me of this girl I dated in high school...

Should You Read Rubicon? 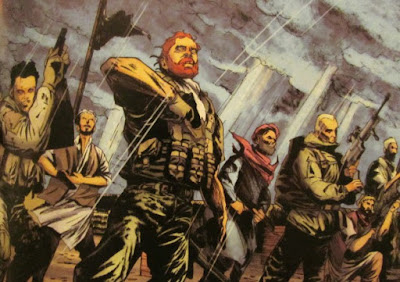 That largely depends on your level of interest in this modern military graphic novel and the price tag. I paid about $6 for the thing at a Books-a-Million in Houston while visiting my mother, and I think that was the right price for it. In the end, I am glad I read and own Rubicon and I think some will enjoy this modern twist on The Seven Samurai....but it is still heavily flawed and if you are knowledgeable about NAVSPECWAR operations as I am then there is just too much wrong to give it a pass. I guess in the end...approach with caution. 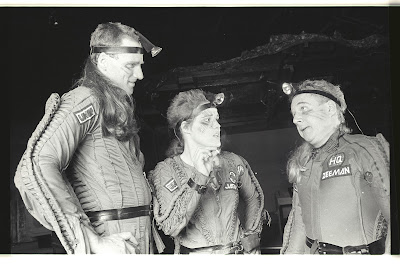 The 18th of October marks one of the anniversaries of a lost and important event in military science fiction history. In the next installment of FWS MSF Oddities, chief FWS Contributor will be exploring and explaining the 1983 Forever War Theatrical adaptation! Be prepared for an amazing blogpost!