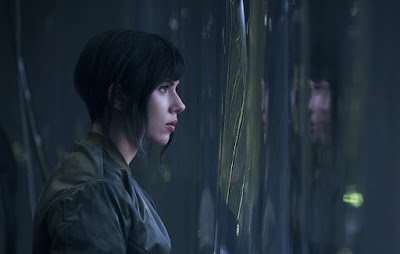 We finally getting to see first image of Scarlett Johansson as Major Motoko Kusanagi from Section 9 of Public Security in the Ghost in the Shell universe. There is not much to say about the image, and it gives little away...well, she got the haircut right! Anyways, this is the big budget American live-action take on the Japanese cyberpunk/military sci-fi manga/anime classic is starting filming in New Zealand. While Scarlett Johansson is a talented actress enjoying the limelight of the geek community since become Black Widow, can she pull of the Major without mimicking Black Widow? And not to mention that she is not Asian as the Major is in the original material which as resulted in charges of "white-washing" the character . I guess we will get the answers when GTIS is released in March 31st of 2017. I beg whatever power governs the universe, please do not allow this film to suck as hard as a black hole as other Hollywood translations of manga and anime titles have been.

Then we have another announcement from James Cameron that there will be yet another AVATAR sequel...which makes FOUR! What the frak, Cameron?! I am so tired of hearing and reporting on these unmade sequels to the 2009 film. According to the schedule published, there will AVATAR films until 2023. We are already behind the proposed schedule for AVATAR 2 which would have been out this year. I honestly do not think that there needs to be an sequel to the 2009 film. There is no story begging to be made from the the original film storyline. All things being considered, the original AVATAR film seems pretty well contained. And I really do not want an AVATAR prequel. Maybe Cameron should take over the Terminator or ALIENS films and stop the bleeding over there. To me, a fan of the AVATAR film, the ship has sailed for an AVATAR sequel and all of us, including you Cameron, need to move on.
Posted by William at 22:26