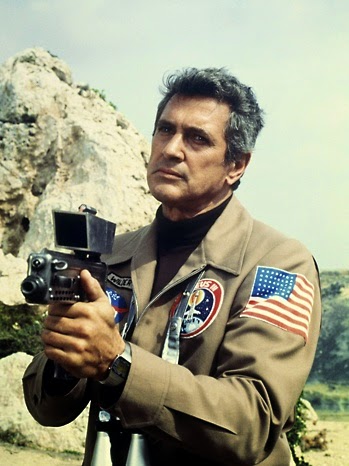 While I am still writing Part 3 of the Special Forces blogpost, I had to write a brief blogpost about this sci-fi oddity I came across today. In 1980, Ray Bradbury's iconic The Martian Chronicles was adapted to the small screen with the NBC four-hour miniseries that starred Rock Hudson. This adaption has been largely forgotten about today due to the lack of connection to the original text and simply how badly received it was even then. Hell, even Bradbury called it "just boring". I saw this back in the day on some random cable channel, and yes, it is boring. During some research on a upcoming What We Will Fight Over blogpost concerning Mars, I came across this photo of Rock Hudson, all decked out his 1970's space leisure jacket safari wear, holding an submachine gun with some sort of plastic-fanatic sight/scope setup. I had to dig deeper on this one! In the film, the NASA and NATO team up to explore and claim the Red Planet for themselves with the first manned mission in 1999, called "Zeus I". Contact is lost with the astronauts on Zeus I shortly after touchdown. Zeus II is sent in 2000, and this time the crew of the rocket ship are killed by the few remaining Martians. In 2001, the Zeus mission commander, Colonel Wilder, leads the Zeus III expedition himself, and the landing party is now armed. 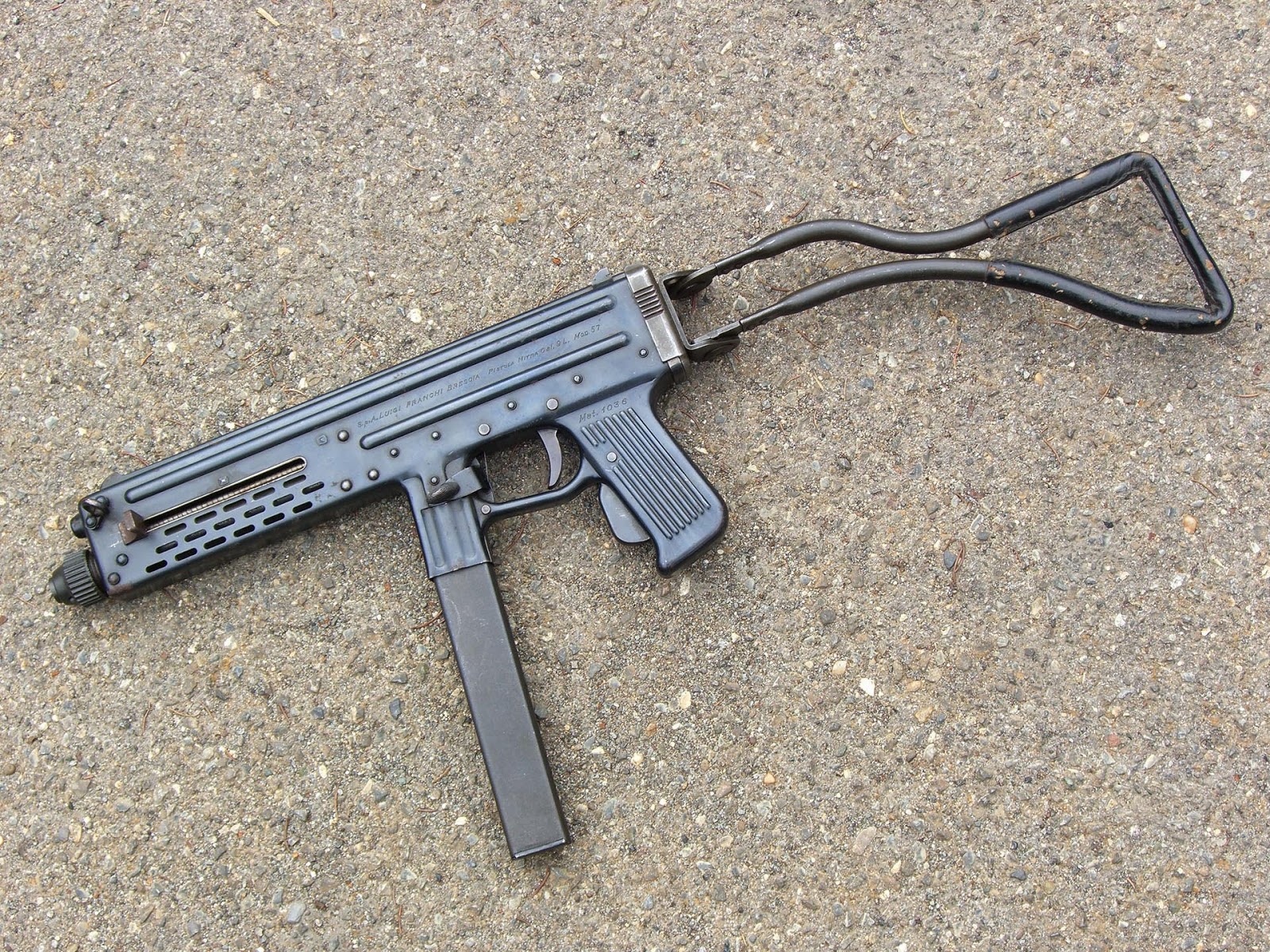 The weapon of choice for the Zeus III military landing party is the Italian Franchi LF-57 9x19mm submachine gun that was first manufactured in 1956 and was a blowback bolt full-auto operation. It is unclear when Franchi stopped manufacturing the LF-57. Franchi is known for the badass SPAS-12 shotgun. Originally, I believed that the SMG in this 1980 sci-fi TV miniseries was the German Walther MPL, until an eagle-eyed reader of FWS by the name of John Dougan clued me in. He told me that the gun was likely the LF-57, and after reviewing the film more, I believe he is right. I've never heard of the LF-57, and visually, it is so close to the MPL, that they are often confused for one another in popular media. Some of the Walther MPLs are actually LF-57s in films and video games. The funny shaped wire shock and the shorter magazine is what gives the LF-57 away in The Martian Chronicles. 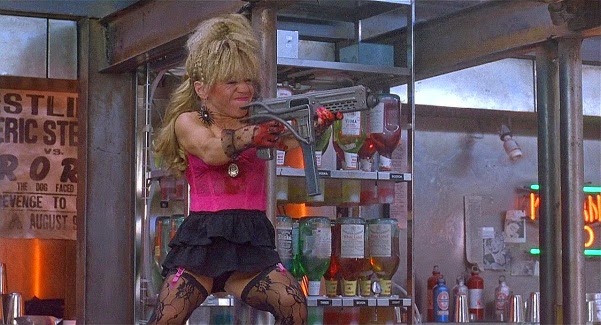 During the heyday of the submachine gun, the H&K MP5 was the king, and the Walther MPL was an early star, and used by a variety of law enforcement and Special Forces units, including DELTA Force. However, the LF-57 did not enjoy the success of the Walther. Some African military organizations bought the LF-57, including the Rhodesian military during the Bush Wars. The Italian Navy used a limited number, but as a whole, the LF-57 was not widely adopted. Today, it is largely unknown, and has slipped into the shadows behind the more well known Walther MPL series. In the miniseries, the MPLs were using an stalking-turned-gun-battle with astronaut Major Jeff Spender. Spender had gone mad and native, and now was using an Martian cone-shaped DE weapon to murder all but two of the landing party. In turn, Colonel Wilder puts several 9mm slugs into Spender's chest, thus ending part one of the miniseries, and the appearance of the Franchi LF-57 SMG as well. 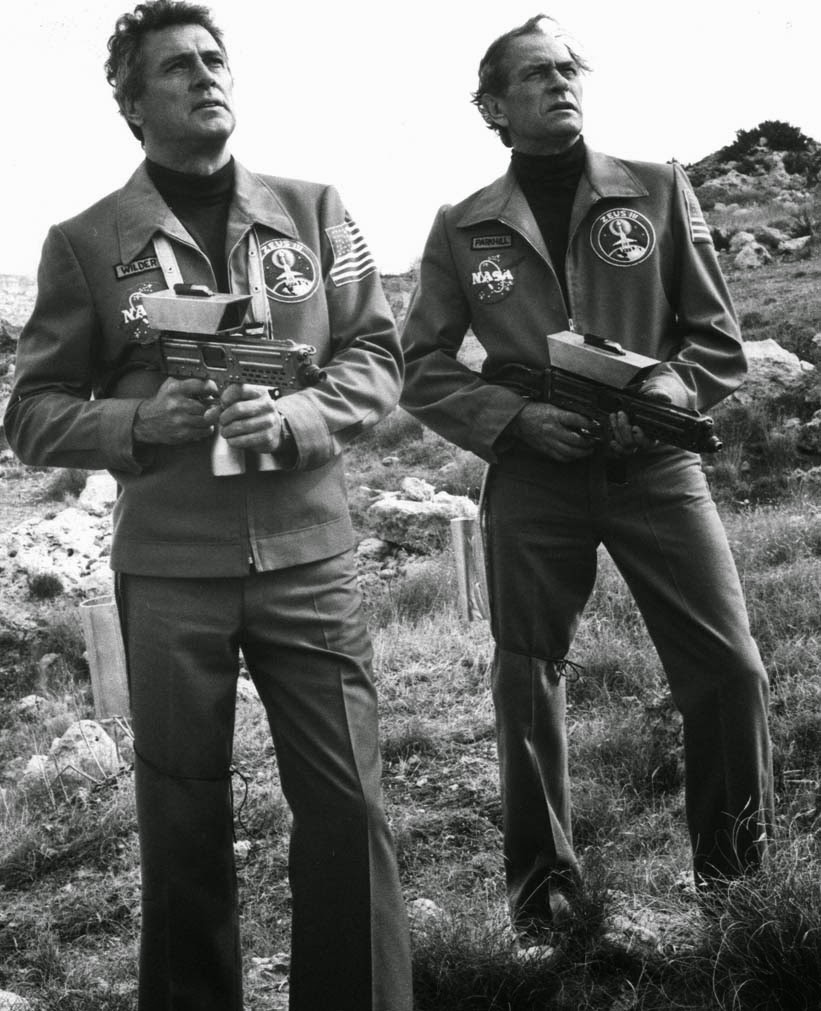 This Italian SMG was worn by all members in the 3rd Zeus mission, and instead of a sling, the LF-57 is housed in a massive sci-fi silver leg-holster with the wire-stock folded. To the show's credit, the SMG is used like normal weapon, but with the cheesy 1970's TV gun sound-effects. Besides the holster, the LF-57 also features a sci-fi appearing square-shaped sight/scope system. During the shoot-out, the astronauts actually aim with the sight/scope, but no mention is about it or what it is. There is the remote possibility that this is some sort of early laser sight, like the boxy Imatronic LS45 laser sight that were seen in films like Terminator 2, Tango & Cash, and the TV movie Eve of Destruction. Another possibility is that prop-master of The Martian Chronicles rigged up a mock laser sight based on the early laser sights. In end, it is interesting to see an old-school SMG on the surface of Mars, I just wished the miniseries was better. There is recent news that Bradbury's Martian Chronicles will be remade...no word if there will be SMGs in the production or cone-shaped Martian ray-guns.
Posted by William at 14:53