FWS Topics: Look What I Found at the Antique Mall! 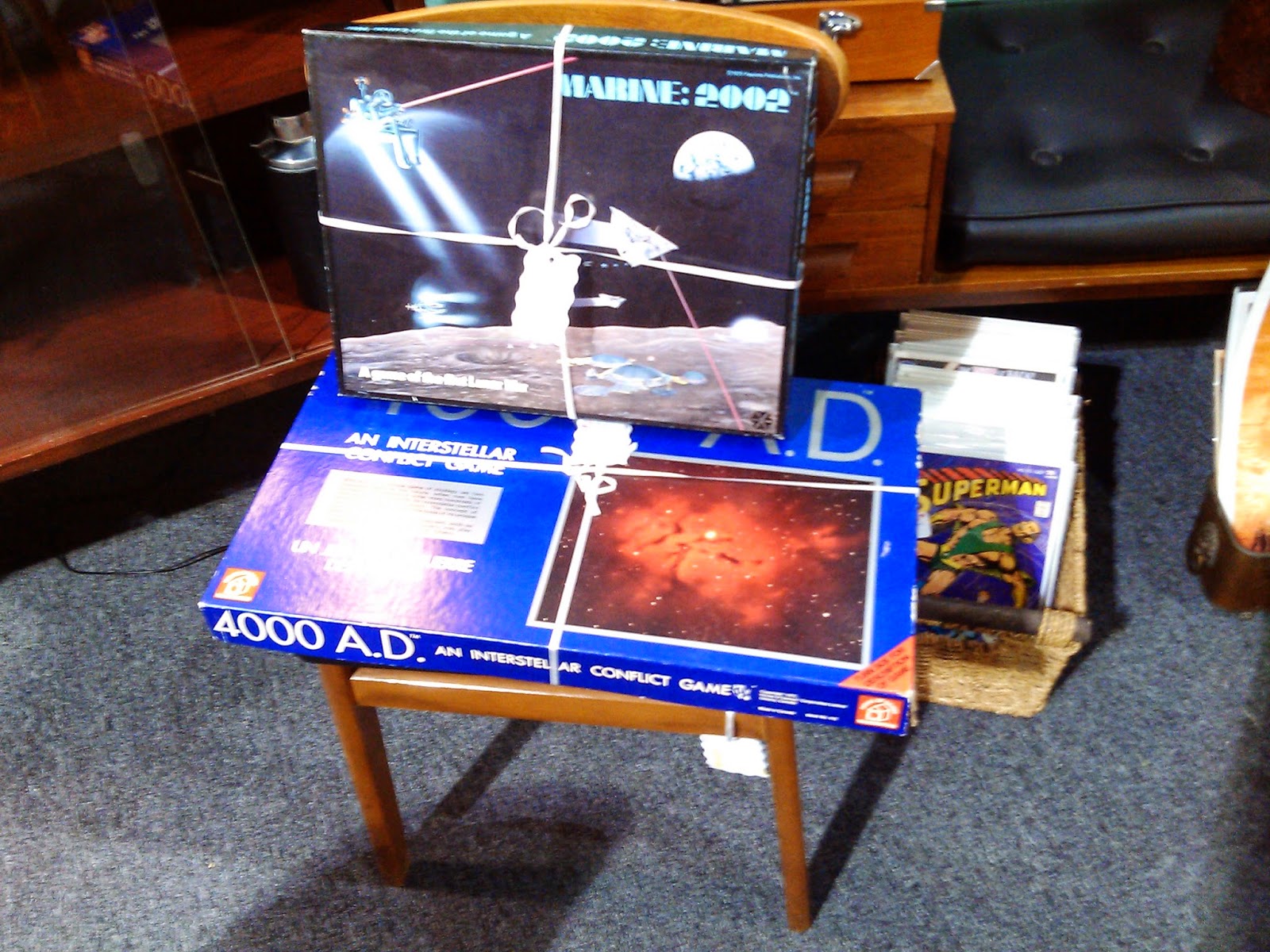 Happy 4th of July to everyone! Today, my wife dragged me away from the second part of the Special Operations Forces blogpost...yes, it is incoming this weekend. The history and roots of modern SOF units has been a real bitch to write and research. Anyways, in the meantime, the wife, daughter, and I went to a local Dallas antique mall to look for some mid-century pieces for our bedroom (I blame Mad Men), and I came across these old military science fiction board games from the 1970's! Freakin' sweet! Since it is my duty to explore and explain the world of military sci-fi, I thought I would write a quick blogpost about these long lost games. I didn't buy them...the seller had them overpriced and I don't think anyone would play them with me anyways. These games have inspirited an upcoming FWS Index blogpost about military sci-fi board games. 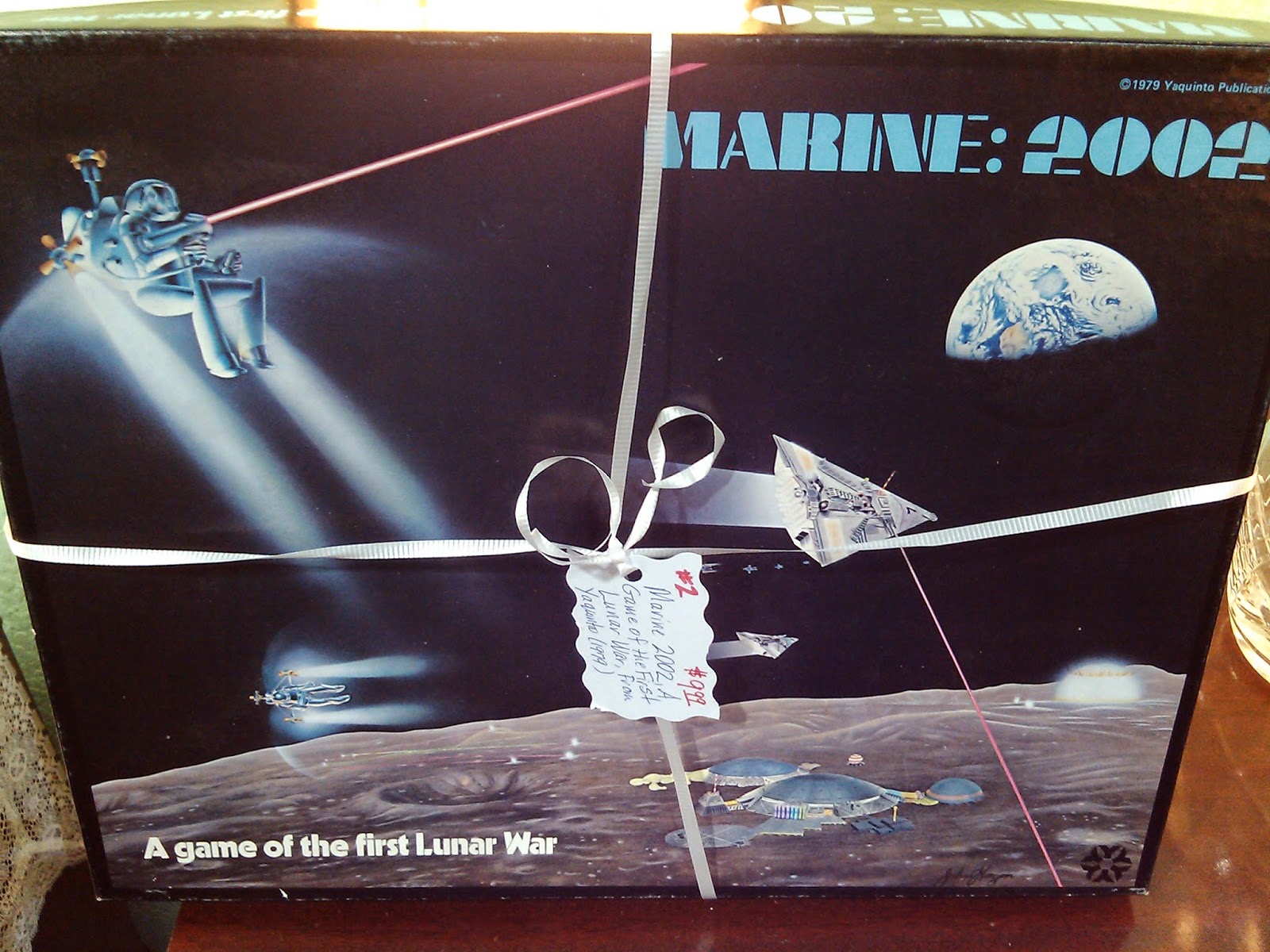 Marine: 2002 was released in 1979 by Yaquinto Games and was for 2-6 players to wage combat on the contested Lunar surface with a variety of space-based forces. American and Soviet space soldiers use particle beams, lasers, mortars, neutron missiles, orbital weapon platforms, and jetpacks to control the lunar surface, along with space planes and armed lunar buggies. The game calls some of the craft "Dragonflies" and "armed lunar buses" as well. Some creative stuff here. The game is a standard hex-gameboard counter tactical scenario game with paper game pieces. The only entry on the internet about Marine: 2002 was Board Game Geek. Wished I had known about this game back when I was writing the blogpost about Space Marines! While this game seems really cool, it seems to have died a quick death just on the eve of the massive popularity of RPGs. Pity. 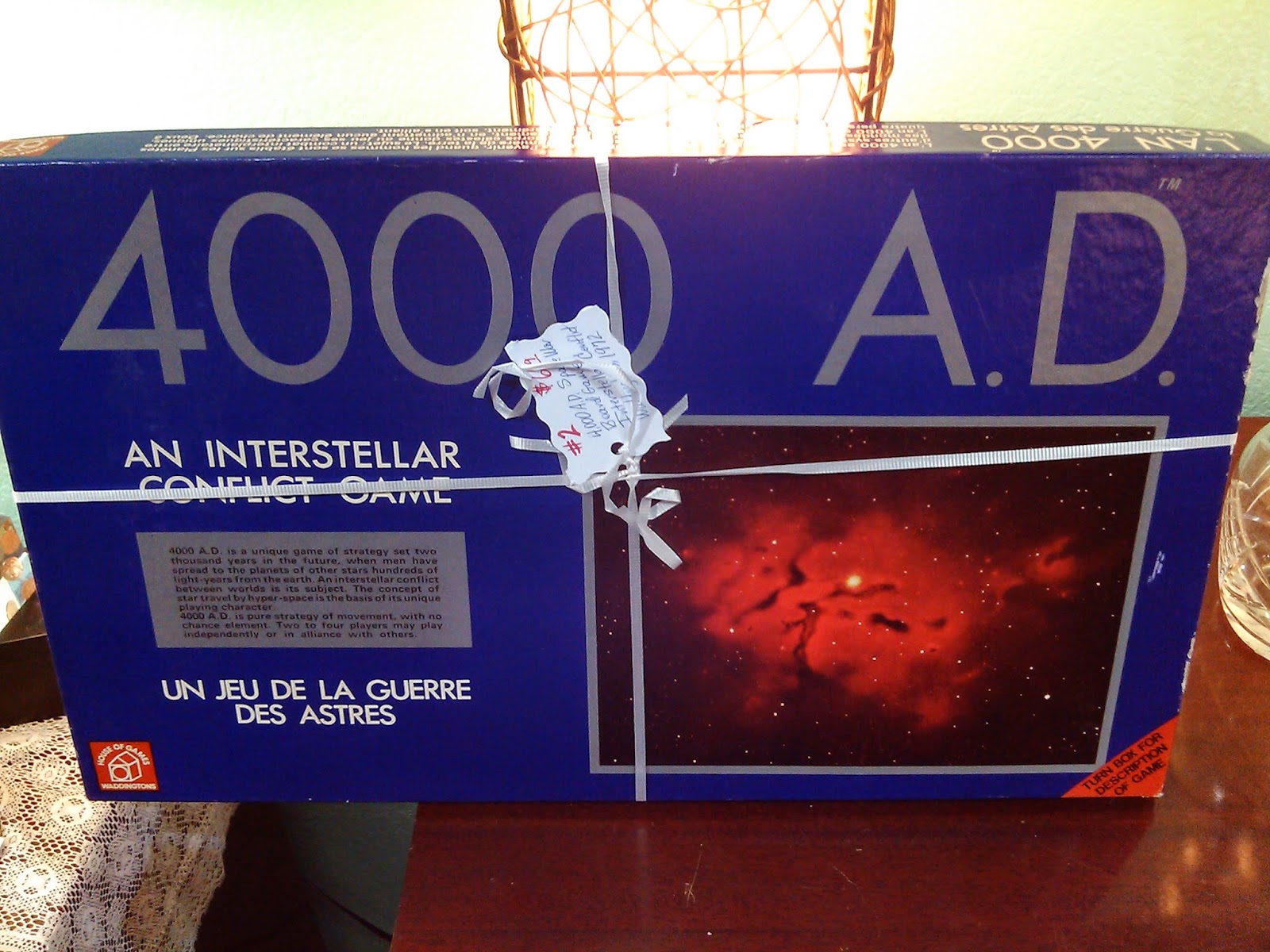 I was not sure what to make of this game when I picked it up. The title was bold and at first, I thought that the game was some type of early Warhammer game...but then, I noticed that there was an zero missing. 4000 A.D. was released in 1972 by Parker Brothers and was 2-4 players. This was a game of space fleet combat, fighting over planets with resources. These resources are used to construct more vessels at their homeworld. The game had an interest "warp" element, where the player selects the number of tiny plastic ships, places them in a grey cup, and moves the ships along a grid on the sides of the board, one square per turn. The other player(s) are unaware which of the sectors that their enemy is warping their space fleet to, making for some nice strategic elements. I am unsure how the ship-to-ship combat worked. Some entries on the gaem seem to say that superior numbers automatically win, which if true, sounds really boring. From what little information there is online, the game was beloved by some, but lacked "combat" and to many, RISK was more fun, and 4000 A.D. slipped into obscurity.

What Do These Long-Lost Military Sci-Fi Games Mean? 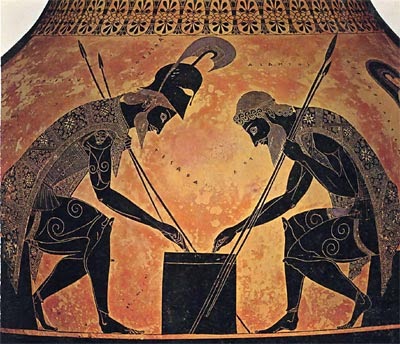 What does these dusty, long-lost military science fiction board games mean to the greater whole of the genre of the military sci-fi? These games, to me, expose yet another layer of the world of military sci-fi. When I was a kid, board games and role playing games were huge, and everyone I knew played them, and a number of them set in a military sci-fi context, and these 1980's games instilled my eternal love for the genre of military sci-fi. 4000 A.D. and Marine: 2002 were symbols of an older time in the genre, just prior to games that I played,  like Warhammer 40,000 and Battletech, and other miniature-based war games. These games, despite their dusty and yellowing boxes, inform me of a time in military sci-fi just prior to the explosion of sci-fi war games fueled by Star Wars and Star Trek. While 4000 A.D. and Marine: 2002 are not Space Hulk or Citytech, they are a piece of the overall story of military sci-fi. It was nice to see that the genre was there with interesting setting and readied gamers to do battle in outer space.