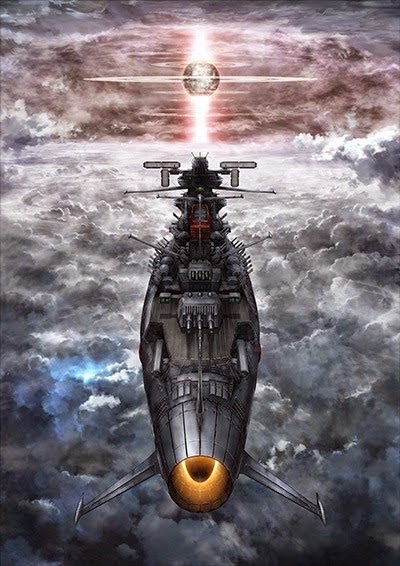 For much of my life as a fan of Starblazers/Space Cruiser Yamato, there was a drought of new material. While videotapes and the odd Japanese book was released, little or nothing was new. There was some hope in the mid-1990's with the work on Space Cruiser Yamato: 2520, but it fuzzed. Finally, in 2010, we fans of the Space Cruiser Yamato/Starblazers  got our live-action movie. Made in Japan, for Japanese audiences with elements borrowed form the Battlestar Galactica Reboot, the film was overall well done. The live-action 2010 film retold the familiar story of the Gamilions and the Journey to Iscandar. Then in 2012, we finally got a remake of the original Journey to Iscandar TV series from 1974, that was broadcast in 1978 here in the States as Starblazers. The epic followup to the original series was the conflict between Terra and the Comet Empire. With the success of 2199, the next series called Space Battleship Yamato 2199: Ark of the Stars will feature a wide Japanese theatrical release. From the just released teaser poster and brief information, the Yamato will be intercepted by the Comet Empire's massive mobile headquarters, the Gatlantis just after they leave the Gamilion home star system with the clock ticking on Earth's survival. When the Gatlantis demands the surrender of the Yamato, they blindly warp due to the pressure of time and further delay. Where they arrive is a strange place with a blazing sphere in front of them. I am a little unimpressed. While 2199 is a great remake of the original series with much needed changes and modernization, we need to avoid the lazy, weird storylines that populated Yamato films after the original two series. I am taking about Final Yamato, The New Voyages, Be Forever Yamato, and even the more recent Yamato: Resurrection. Seriously weird situations these later films. My hope is that the new Yamato efforts firmly avoid this...for the sake of us fans and the future of Yamato.
Posted by William at 18:27