FWS Topics: Ten Years Ago...Looking Back At The BSG Miniseries 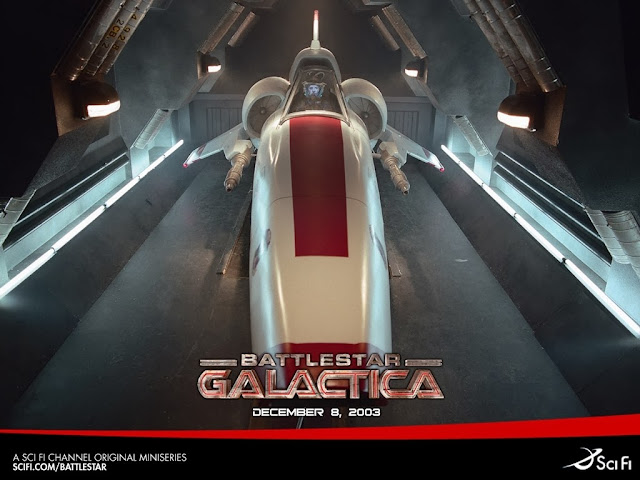 Where does the frakking time go? It has been ten year since the Sci-Fi Channel aired the first part of the Ronald D. Moore/David Eick Battlestar Galactica miniseries. Ten years. Given the importance of BSG in the realm of military science fiction, I thought we would look back on one of the greatest events for TV science fiction as a whole. Prior to the 2003 miniseries, BSG was a bad state of affairs. FOX and USA were going to continue the story of the original 1978 series, by picking up years after the original run of the series, and the dogshit Galactica:1980 was going to be ignored...thankfully. All of this was going to headed up by director Bryan Singer. Around the same time, Richard Hatch was shopping around his own proposed series trailer that he funded himself, called Galactica: the Second Coming. The attempted Bryan Singer BSG project was delayed after September 11th, and Singer had to drop out per prior commitments, and the studio ignored Hatch's proposal. It seemed that the attempt to bring this old property back to life was dead. It seemed that USA/NBC moved quickly when Moore and Eick proposed their spin on the old themes and events of BSG. 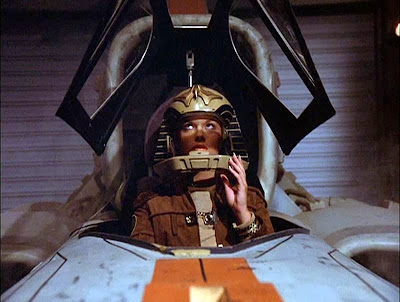 Galacticia fans were a small, but diehard legion that kept hope alive that one sweet day, the gods of television would see the errors of their ways, and put BSG back on the air...and not more shit like Galactica: 1980. After that dogshit series failed, the property went into hibernation. While you could still catch BSG repeating on the old Sci-Fi Channel, the series began to look more and more cheesy as time went on, especially when Space: Above and Beyond hit the airwaves in 1995. Fans of the old series were relieved when Bryan Singer decided to continue to the original Larson concept, much to the rejoice of the series fans. But that project died, and once again, fans were left with nothing. When Moore and Eick got the green-light, there were waves of concern among the community of old-school BSG fans due to the amount of changes that were undertaken and with the ties that RDM had with Trek. Starbuck being a woman created a major stir, along with the hard-edge, more realistic tone. I can remember rumors of Cylons being built by humans, and there would be no more laser blasters and somehow BLADE RUNNER was going to be added to the mix. It was also worrisome to fans that Moore and Eick had been quoted as saying that they were going to strip away the 1970's and Star Wars veneer. 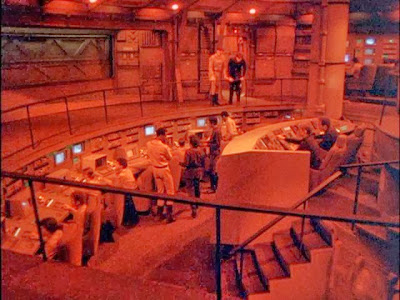 The majority of fans of the original series were put off by these changes, and most of them wanted a return to the concept and feel of that 1970's sci-fi failure. For some of us that do not remember the original 1970's Battlestar Galactica, we should talk about that as well. Back in the late 1970's, Star Wars was the juggernaut of the box-office, and had changed science fiction as well as society, and everyone wanted to make some money off of this trend. BSG was sold to ABC by Glen A. Larson as a series of TV movies, and would capitalize on the trends of Star Wars, Chariots of the Gods, and fears over greater computerization. The series would die after one season mainly to the expense of the show and wandering focus of the show, and stiff competition in their time slot. To me, the original series never lived up to the promise of the story and the sets. While some of the acting was good, and there was a kernel of good science fiction there, most of the series was half-baked and a product of its time. 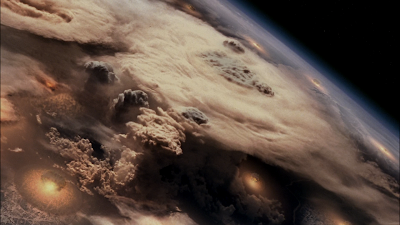 Rewatching the 2003 miniseries, and being a history major, you notice that Moore and Eick tapped into certain events in American history that allow for those in-tune to see the connection. For those not in-tune, that is still a power image of nuclear mushroom clouds, people running away from the danger, the president being sworn in on a plane, leaving people behind. For me, the miniseries brought up feelings of September 11th, and made the situation with the colonies more realistic and current that an event that happened 150,000 years ago. This was one of the beauties of the miniseries, raw emotional punch that so lacking from the Saga of a Star World. 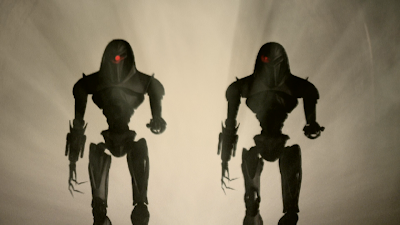 For this blogpost, I decided to watch Saga of a Star World and 2003 miniseries The new BSG became a sea change to science fiction, especially military sci-fi. It was frequent called the "best show on TV", and the ending is still discussed today. I was continuly impressed by the 2003 miniseries, the complexity, the historical references, the levels of emotion, and the care of design and story. Then I watched the 1978 TV movie and....well....While it is true that any work is a product of their time, the original BSG suffers greatly from this. The attack on the colonies is lame and underwhelming. The entire focus of the story if completely off, and while the acting is good, there is nothing for them to do. While the 2003 miniseries is most superior in every way to the 1978 variation, I did miss the Colonial Warriors concept and the badass original score. Also, because I've seen the entire series now twice, I had to admit that the fourth season of BSG was weak, especially the whole Baltar-being-a-messiah thing, I like the end of the series. I know that some people have an issue with the disappearance of Starbuck, or that the remains of the 12 Colonies of Kobol bend with us, to form an hybrid species. In some ways, despite all of formal training in history and that I am godless, I would like the end of BSG to true. 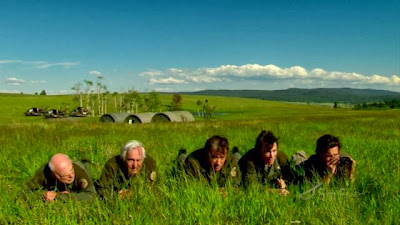 That some part of all of our DNA comes from people from the 12 Colonies, and they gave us some noble and true. After all, wouldn't it be interesting if portions of the foundation of our civilization was from our there? Could have there been brothers and sisters of man, battling to survive among the stars, thousands of years before the foundations of cities, the taming of fire, and religion? Could we be them? Wouldn't that be cool?
Posted by William at 07:14