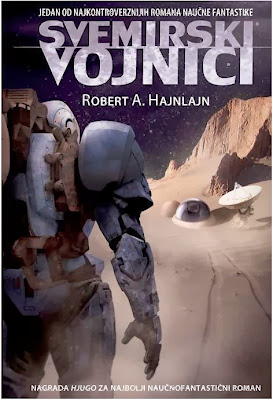 Even while FWS is on holiday in New Mexico, the world of Military Sci-Fi didn't slow down...good FWS friend Derek Restivo FB'ed me on the breaking story about the remake of Starship Troopers and I had to break out the iPad. It seems that the remake SST writer, Zack Stentz reported during a Twitter exchange with film blogger Scott Weinberg that the new film will be closer to the original 1959 novel, and it seems that 1997 film style will be completely abandoned. To quote Zack "An Officer & an Gentleman with Power Armor." Very cool and if the SFX is solid with the powered armor and the bugs, we could have a real winner here...finally. The new film's producer is Neal Moritz, who worked on Battle: Los Angeles, could translate to some serious battlescenes. I am personally hoping for a opening similar to the novel, with the raid on the Skinny homeworld...complete with atomic grenades. So, when are to expect this remake SST? Around 2016 according to them. Right now, the script is still being written, and no stars are casting, and I don't know if a director as been settled on. Also on this article was the reaction of director Paul Verhoeven, who was less than impressed with the effort to bring a different vision to the battered world of SST. 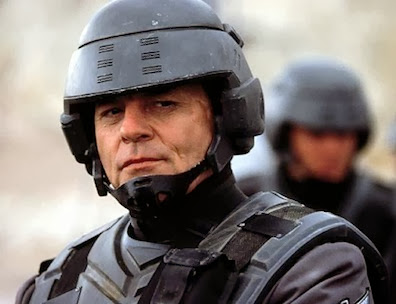 I personally think that he knows if the new film is closer to the novel without the oddness of his 1997 flick, it would relegate his SST film out of importance in the realm of science fiction...and that most of his films have been or will be remade. That aside, Starship Troopers is the founding classic of military science fiction, and deserves a work that will take the effective elements of the original 1959 story and springboard that to an epic war film set in the future. One of the major questions I have for the upcoming film is if the politics will remain? The 1997 film handled the society of the Federation will an "interesting" take, and with the tone of the film, it worked. The people working on the remake should pay attention to that....because if you bog down the new 2016 film with the heavy-handed iron politics of the novel, than this future war picture will suffer greater. I do think that one casting decision that should be retained from the 1997 film, Michael Ironside...that man is a badass, and worked well in the film. Damn...this is a long news flash blogpost...why does SST bring out the wordiness in me? Alright...back to GHOSTS.
Posted by William at 22:03