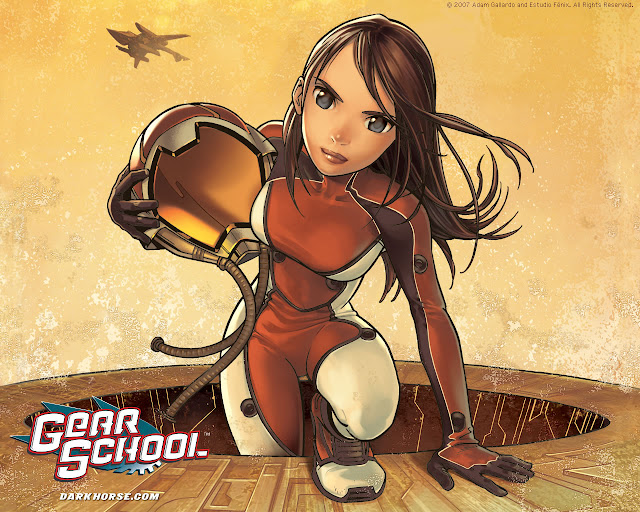 Comic books and military sci-fi are a great combination that used to serve has an introduction for younger readers to stories about future wars on distance planets with badass weaponry, hot female soldiers, and terrifying alien foes. Today, with the influx of Japanese Manga into the Western comic market, Western comic book creators are turning that much beloved style to jazz up Western comics...or ruin them, depending on your opinion. One of the children of this fusion of the Western and Eastern is Gear School,published by Dark Horse in 2007 in a micro-graphic novel format by the Spanish team of Adam Gallardo, Nuria Peris, and Sergio Sandoval. Since the release of the first graphic novel, there was a second volume in 2010, and an nine minute live-action short called Gear School: Plug and Play. This is one of those comics I discovered on the Dark Horse website, and was attracted to the concept prior to the founding of FWS, partly because of its similar to my first MSF novel that is stuck in rewrite hell (I'm so sorry Sarah!). FWS will be reviewing the second volume of Gear School in a future review blogpost...when I quiet spending money on DVDs and my cat (who is very sick at the moment)! Gear School was published in 2007 in the small trade paper book format by Dark Horse with 96 full color pages, and is still in print and available for about $5.

The PLOT of Gear School 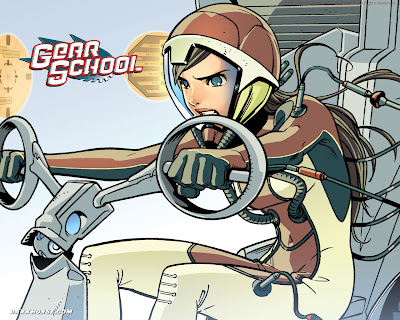 What happens when you combine ROBOTECH, with Gossip Girl, with elements of Ender's Game, and elements from Japanese high school centered manga? Why Gear School of course! In the fictional world of Gear School, it is the future (no year is given), and humanity is at war with an aggressive insect-based species that appear to use organic technology, teleporation. In response, the Earth develops the Gears, and trains mecha pilots from a young age at an exclusive military academy well away from urban centers. The story of Gear School, is centered around 13 year old Teresa Gottlieb during the beginning of actual flight training with the gears instead of simulation. It is rumored that Gottlieb only gained entrance into the academy via her connected family, and not her skill. While she is dealing with flight school, Teresa is also trying to get a boy to notice her, battle the bitches at her school, and study with her BFF. During her effort to improve her studies and flying, she learns that command has evidence that the alien possess teleporation, and that she is on thin ice with the academy's director. Things heat up for cadet Gottlieb when she finally takes a Gear to the skies. 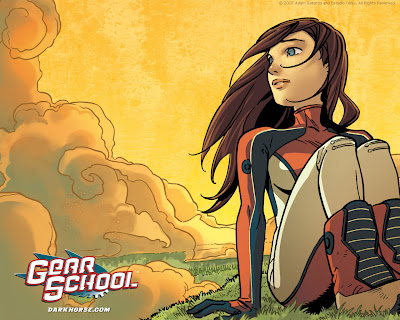 There is no denying the power of the art by Nuria Peris here in the pages of volume, Teresa Gottlieb and her cadet-classmates are drawn and inked in expressive brilliance, and it easy to see how Gear School could be an amazing Anime series. This is not just with the Teresa and her young classmates, but also with the interesting and mysterious characters of Major Wheeling and Captain Tsing. This impressive art extends to the mecha, the school itself, and designs of their world. Also, the fusion of these different art styles, and story elements work, making Gear School familiar and easy to read, especially to those familiar  with Anime/Manga and MSF. I was impressed by the creators to incorporate middle-school stressors within the context of a MSF story and pulling it off. These are elements that all of us know: the fucking pain that is unrequited love (yes, dear readers of FWS, not all girls like guys that are into military sci-fi back during the 1980's, like your truely), bitchy classmates, homework, teachers, classes, and not find your groove...ah, yes...being a 13 year-old is a pain in the ass,and Gear School reminds you of those painful days, but in a good way. 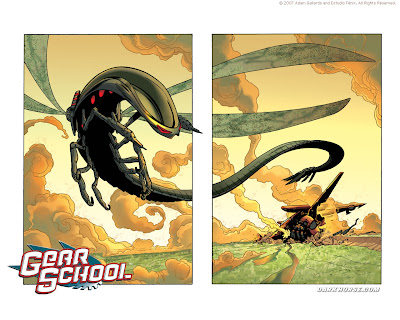 Okay, you know more after reading the first volume of Gear School about Teresa's crush, Ben Castillo, than the gear mecha fighters or their alien foes. Seriously, I shit you not, and it bothered me. I mean, what is Gear School about then? Middle school with mechs, pre-teen angst and tight body suits? I completely believed that Gear School was something else than it was...I wanted something like Ender's Game, where we the readers experience the trauma and drama of a military academy, but we are rewarded with seeing our characters at war all grown up. My first unreleased MSF novel was like this, and I thought Gear School was too. Boy, was I wrong. This micro-sized graphic novel covers nothing on the war against the aliens, and most of the plot is Teresa comes to grips with her world and relationships. This is a narrow focus that both makes Gear School unique and madding. There is nothing covered on the world that Teresa and her little friends occupy and none of the critical questions are covered. Why is Earth fighting the aliens? Why does the military need 13 year old girls to be mecha fighter pilots? Who are these aliens and what do they want? The shame of it is that the mecha design is cool and the aliens are well designed, but we see little of it in volume one...maybe in volume two?

The UGLY and Creepy... 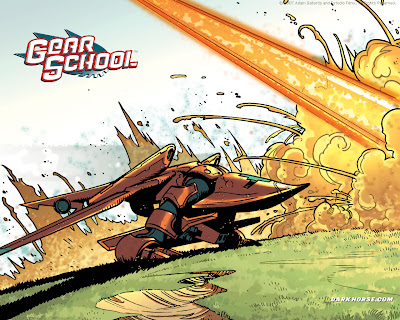 After I breezed through Gear School in less than 30 minutes, I re-read it, and dwell on it, and found it to be lacking overall. While Gear School is pretty, fun, and does an amazing job with capturing the pre-teen experience, it is far too light for its own good. Then there is something else that I have reservations talking about...the way Teresa and her underage friends are drawn. True, the art is very good, but Teresa and her friends wear too-tight flight suits, and there is an undressing scene that was unnecessary. It is possible because the art team is Spanish, that my puritanical Americanism is showing...but seeing 13 year old girls in tight flight-suits with the art focusing on some of this, creeps me out. I even showed this to my wife, and she agreed.

Should You Read Gear School? 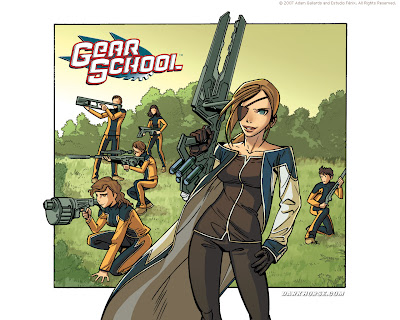 Oh, I didn't know...the art is a very nice fusion of Eastern and Western, the overall concept is interesting, but for this comic to be recommended, the concept would have to work more than it does here. On of the marks against Gear School is that it should have been a monthly series that  would have allowed for Teresa and her friends to develop from pre-teens to becoming military mecha-pilots, serving in the war and documenting their evolution from starry-eyed girl to jagged combat pilot. I really wished there was more to Gear School honestly, because I really wanted to like this comic because of my childhood watching Anime and reading Manga...but, Gear School is half-baked, and it doesn't help that it is short. Overall, Gear School is a good beginning.

What Could be Done with the concept of Gear School

Given that I was a teenager when the original 90210 was on TV, and my wife watched Gossip Girl, I understand that Gear School could be a very cool SyFy or even CW teen TV show that could appeal to geeks, nerds, girls, and MSF fans. All of the elements are there, and this could be one of the more unique sci-fi TV shows in a long time. Yes, I totally added a photo of Gossip Girl on FWS....this indeed, is a disturbing universe.

Wasn't There a Live-Action Movie? 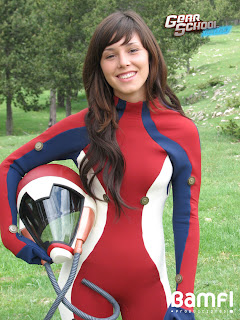 Yes, produced by BAMF! Producciones, a Spain-based film company in 2010, however, their facebook page states that they are an advertising  agency...odd. Anyway, Gear School: Plug & Play was a short film telling a simple story about Tersea and her friends taking out a gear on a joy ride. and starred Paula Jimenez Garcia as Teresa. Overall, this film effort got some of the visuals right, along with some talent behind and in front of the camera. If you read the comic, than this film ready does justice to the concept. My issue is that instead of something like HALO Land Fall, we got a couple of teenagers pulling a prank. This nine minute live-action short is on youtube, but with English subtitles. Once again, while this was done with skill, it is not want I thought it would be,