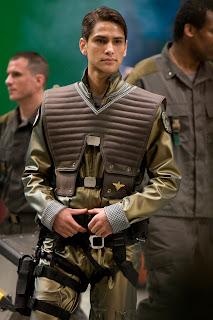 It seems that November is going to be a good month! This Friday, the 9th, the first installment of the pilot for Blood & Chrome will be seen on Machinima Prime. Over the course of a few weeks, the two-hour pilot will be broken up into 10-to-12 minute installments. Sometime in 2013, rumor says April, the SyFy Channel will air the full pilot, then release an unrated DVD/download sometime after, much like Razor. But what about a full series? That is in question and may largely depend on how successful the pilot is, much like the path of the original 2003 BSG series. From the sneak peak, it looks good, with some corniness,but it is the central story idea that bugs me. Why the frak would Blood & Chrome start just has the ten-year Cylon War comes to a close? Just because Adama was only in the war for a short time, does mean the series has to be condemned to that time frame. I'm personally excited about more BSG even if it is just a two-hour TV movie, and doesn't lead to more. FWS will be reviewing the entire pilot at a later date.

Here is the Sneak Peak