I was on another forum last weekend, and there was a thread about the 2nd Amendment, and there were people (me included) arguing about how people of the 18th century viewed firearms is completely different than here in 21st century. I also argued that when or if science deliveries laser blasters or plasma pistols, it is likely that governments will ban their sale to the common people. That got me to thinking about the future of civilian-owned personal weaponry, and a subject that sci-fi does not talk about much: future gun control. 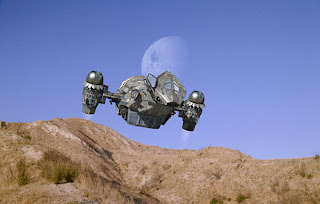 Will the future generations be able to walk  into a sporting goods store and buy a Phased Plasma Rifle in the 40watt range? Will there be a difference between the military-grade DEW or HV KEW weaponry that the future soldiers use and the firearms that citizens could buy? Will guns be banned on Terra, but legal in the off-world colonies, like Replicants? Will Guns & Ammo change its name to Blasters & Batteries?
What about ship-based weaponry, would civilian haulers be unarmed like in Firefly or Cowboy BeBop, or would they be limited power output? One can imagine the horror a single vessel would reap with kinetic projectile. 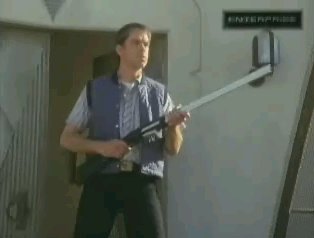 Most sci-fi works are mixed on the subject, in the golden age of sci-fi, every explorer had a trusty raygun, and later, with the influence of Star Wars, every badass carried a blaster. In the Star Wars universe, blasters seem legal enough, Han walks around with a blaster like Clint Eastwood, and Mal and his gang from Firefly stroll around the planets with their weapons mostly out. But in the Star Trek universe, the only time I saw a DEW in the hands of non-Starfleet that wasn't a evildoer was in the pilot episode of Enterprise when some farmer from Broken Bow, Oklahoma shoots a Klingon with a plasma rifle, and later in the series, we see civilian cargo haulers equipped with the Starfleet issued EM-33 Plasma Pistol. However, most, if not all civilians in the Star Trek universe seemed unable or unwilling to buy a handheld phaser. And if they did, would it equipped with a "kill" setting? After all, in the ST:TNG epsiode the most toys the Federation banned the ownership of the Varon T-disruptor. In the book the Forever War, when Mandella gets back home the first time, he tries to buy a C02 laser, but the gun shop tells him that they are "legal" store, instead, he buys a .410 Revolver.
I would like your opinion on the subject! Please comment below!
Posted by William at 10:48