In 2001, the new high-powered video game console, the Xbox seemed like a stillborn property, that was until we gamers discovered one of the finest games ever made: HALO: Combat Evolved. Now, a decade later, the spin-off of Bungie, 343 Industries, has visual reconstructed the journey as a love letter to the fans and future fans. This was the only game I ask for Christmas, and I have been spellbound replaying the campaign and the new Firefight level, giving ,e a back from Call of Duty: MW3. So, here is the FWS review of HALO: Combat Evolved Anniversary (HCEA).

What they changed and what they didn't change 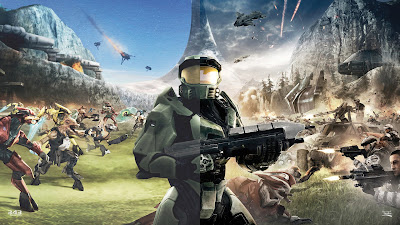 Let me clear something up, HCEA does use a modded version of the HALO: Reach engine, but Anniversary looks nothing like that game, it appears more like the 2001 original, like a visual retrofitting. In a majority of the ways, HCEA has been tweaked in small ways, adding up to a more more detail, rich, smoother gameplay experience. This doesn't take away from the original experience of the game. In comparsion between the 2011 HALO: Combat Evolved and the original classic 2001 edition, is the way that the Aston Martin DBS is slightly better than the Aston Martin DB9, or the Porsche 911 Carerra S is slightly better overall than the standard 911 Carerra, however, the original standard version of these cars are epic in their own way.
The gamer developers did not add HALO: Reach weapons, nor the alien enemies, or the melee Assassination system, everything is as you remember it, only much frakking better.
Rest assured, the vast majority of weapons from the original are still the same, UNSC MA5B still is like it was in 2001, along the M6 .50 pistol, but the alien weaponry as been visually improved, more so than the UNSC weaponry, like the plasma bolts being smaller. What has been changed, in terms of weapons, is their sounds, and this is for the better.

The tweak that I was the most disappointed with was the Warthog, in HCEA it sounds like a diesel, when it actually runs off of hydrogen, and is  much slower to get moving, and slower overall. 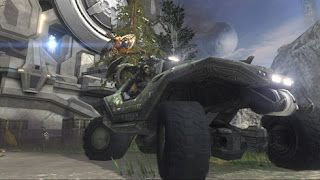 Two welcome addition to the HCEA disc was the Installation 04 Firefight map, and the Terminals. This new Firefight map does have NPC ODST soldiers to help you, and fully uses the HALO: Reach weapons, enemies, and mechanics, but be warned, this is crack-like addictive. The other new addition elements, is the Terminals, which you hunt and find around the levels of the campaign. This are pieces of the story from the POV of monitor Guilty Spark 343, its life onboard Installation 04 after the Forerunners all die off, the appearance of the humans and aliens to the ring, and hints of something else. Some sources have said that these Terminal stories are hints at the storyline and main enemy for the new HALO trilogy coming in Holiday of 2012 (most likely November).
Here is video of a comparison of the 2001/2011 weapons: 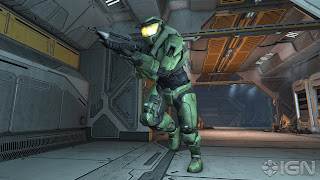 It had been a about a year since I played the original HALO campaign, due to playing realistic military shooters like Modern Warfare and Medal of Honor, then after playing Reach, it seemed that the old game was going to be pushed further back in the game cabinet. What HCEA did was rocket one of the best video games of all time back in the hands and minds of gamers, and re-lit the love for the game that started it all. The one of the best parts of HCEA is that 343 Industries didn't frak with it, they visually updated it, making it more of retrofitted game by keeping the positives and negatives. I had been worried when I read that the Reach engine had been used for the game, which would have altered HCEA into another game, resigning the 2001 original edition to the archaeological status. But what they did instead was polish an already legendary game.
The BAD 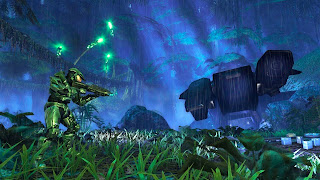 The issues and problems that existed with the original HALO: Combat Evolved crop back up in this update, like the repetitive enemies types, walking through the Installation 04 over and over, the helplessness of your marine allies, and so on. But, the 2011 update itself, there is nothing bad here, in fact, I loved HALO more after playing it.
The UGLY 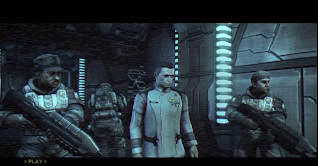 The only ugly portion of the entire HCEA is the cutscene face animation, which I never had a problem with in any of the HALO games, but somehow, 343 Industries made everyone look like they have buck teeth...or maybe the UNSC's dental plan is lacking or dental technology of the 26th century has taking step backwards. I am honestly shocked that 343 Industries would allow this flaw to make it to the final product.

Should you buy this Game? 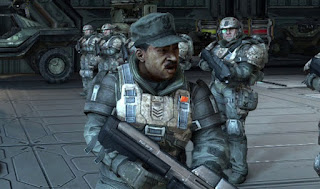 That depends on how you reacted to the original HALO: Combat Evolved, if you hated the original game, than you should save your money for therapy, because this game is still the same game, just visually updated. The same issues and problems that people had with the campaign still exist in HCEA. If you loved HALO, like I do, than you must likely own this game and are playing it now.
Posted by William at 12:36