FWS News Flash! Starship Troopers to get a remake! 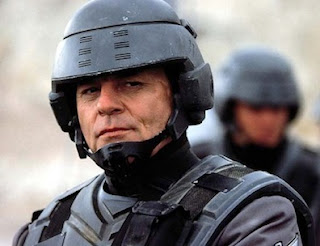 io9.com posted yesterday that Sony Pictures has greenlighted the remake of Starship Troopers, and has hired two screenwriters, Ashely Edward Miller and Zack Stentz (X-Men: First Class, Thor) along with the producer of Fast Five and I am Legend, Neal Moritz. There has been a remake rumored since 2000, when the SyFy Channel was eyeballing it for a big mini-series, like they did with Dune and Battlestar Galactica. But nothing came of it, while sequels based on Paul Verhoeven's 1997 film continued to be spawned. There was a 2000 CGI cartoon series called the Roughnecks: Starship Troopers Chronicles that attempted to bridge the gap between the book and film, but ran for only one season. This is the best news we've heard about a serious complete remake in over a decade, and Sony Pictures seems to be serious about breathing new life into the Starship Troopers name. 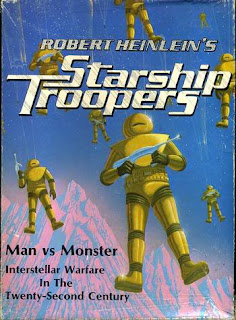 But which version will get the remake? Will this reboot be based on the 1958 founding classic novel of military science fiction, or will it be based on the campy 1997 film?
Another question, will the B movies that are descended from the 1997 film continue? Like rumors of another Battlestar Galactica based on the classic 1970's series?
None of the articles I've read point to an answer.
My hopes are high that the book will finally get its cinematic due, but with added layers that allow it be more of a well-rounded product, unlike the book, which is a little dull and gets on a soapbox about politics one too mny times, while the movie is...well...bad.
FWS will be talking more about the previous Starship Troopers films in a few months with a Broken Promises blogpost.
Posted by William at 18:25