FWS News Feed: The end of Terra Nova? And the Goliath Trailer 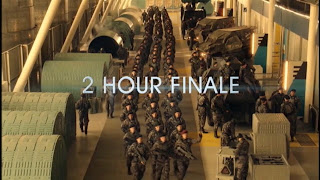 It seems that Terra Nova is finally going to be put out of its misery. Monday's episode had a promo for next Monday's (12/19) two-hour season finale, and some sites are saying, along with star Jason Omara (via Twitter) that the final decision to send Terra Nova to the Gallows Pole will be made around the first part of the new year. That seems unlikely, the overall arch of the central plot, Taylor's son, the 11th pilgrimage, the Phoenix Group are all coming to a head at an accelerated pace, and it seems that the climax will be showed on 12/19's two-hour finale. These signs all point to a show that has entering the end of its life and the creators are trying to wrap the storyline up for the fans and DVD boxset.


The 11th Pilgrimage and the Phoenix Group?

﻿ ﻿The powers that created the time portal and the colony of Terra Nova do not share the goal of using the Terra Nova settlement as a second chance for mankind with Commander/Governor Nat Taylor in charge of the operation. Since the pilot, there as been a shadow storyline (much like Lost) of some other group seeking to control Terra Nova in the past and in 2149. During the last few episodes, it as come out that Taylor's long-lost son, Lucas, has been working with the Phoenix Group to establish a stable time-bridge and use Earth-of-the-Past for resources to save the dying Earth of 2149. Prior to this, the Phoenix Group attempted to use the Sixth Pilgrimage as a force to oust Taylor from power, but lost, exiled, and became the central pain-in-the-ass to the colony since. Lucas finally got a working micro-time portal device and attempted to rise a coup with the arrival of Taylor's commanding officer, General Philbrick. The plan didn't work out, and Taylor had his son exiled, taking him years for him to gather the resources to rebuild the device along with working out the math. Lucas and the exiled Sixers allied together with the 2149 Phoenix Group to achieve their similar goals, apexing in the 11th pilgrimage. With military forces coming to the Terra Nova settlement, we can all bet that the settlers will use dinosaurs to win the day, then send a message to 2149 for the colony to be left alone, and the colony disappear into the past...

What happened to Terra Nova? 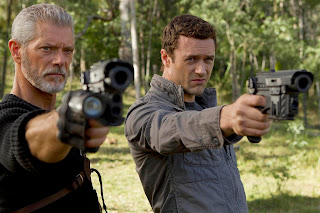 There were high hopes for Terra Nova, especially with the big names and bucks behind it, and I have to give FOX credit for attempting to keep this show around longer than they would have if Steven Spielberg wasn't a name on the credits. What killed this $1.5 million-per-episode time-traveling epic was that the characters, storyline, and the general mood never gelled, creating a show that always felt half-baked, and unable to move the ball down the field. There is simply a lack of creativity on the series, they wasted the concept of Taylor's lost son, the Sixers, and a fresh start for mankind. The Shannon family was to be core of the show originally, but these characters failed to say or do anything that mattered, often the Shannon family boiled down Jim Shannon and Commander/Governor Taylor going off on bro-love missions into the jungle together. This lack of having characters that were not developed enough and could not carry the show forward or for us to care if they were eaten created the downfall of everything else...wait, that might have made a better show.
Then there is the heavy-handedness of the storylines, and lack of being able to build the mysteries that were raised during the pilot. In the end,  Terra Nova's fate is similar to another Steven Spiedlberg TV series, SeaQuest DSV, where big names, big money, and a big network would not make it work. It just goes to show that it all comes down to writers. Maybe in a few years, Terra Nova will get a relaunch or remake.


This very low-budget Military Sci-Fi/Alien Invasion trailer for a proposed movie is directed by Alex Popov, and it is quite simply amazing. More amazing is how technology allows filmmakers without a company or backers, like bloggers, to make impressive adverts for their craft. My brother and I made movies with our Super 8 camera, and later, a VHS camcorder, and it impresses me the level of beauty that be achieved via modern software. My hats off to the filmmakers of this daring trailer, and for making an original idea that I wished I come up with! It is my hope that someone in Hollywood sees this, and allows this military sci-fi dream to be a bloody reality.
Posted by William at 10:05