FWS News: All You Need is Kill Movie Deal! 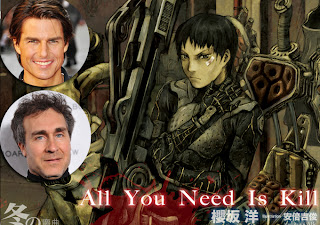 This is a little dated by now, but it has been announced that Japanese light military sci-fi novel  All You Need I s Kill (in between a regular novel and a graphic novel) by Hiroshi Sakurazaka is slated to became a big-budget Warner Brothers Hollywood film being directed by Doug Liman (from the Bourne Identity) and starring Tom Cruise.
All You Need Is Kill is about an one day in the life of an armored power suit soldier from the 301st armored infantry division that is in the middle of a bloody war against an alien species that has laid siege to the Earth. The newbie soldier knows that his fate is to die on the battlefield, but then is caught in a temporal loop, repeating the same day over-and-over (Groundhog Day anyone?).
This is great news really, Tom Cruise as proven to a good track record with science fiction films, and Doug Liman is a skilled director with a good eye towards action and environment This is also good news for MSF as a whole, All You Need Is Kill as armored power suits, big sci-fi battles, and time loops, along with being widely acclaimed. I've read the a couple of pages of the light novel and found to be an excellent MSF read, and if done properly, it could be a real jewel of military sci-fi pictures. With a few other MSF movies on the horizon, the next few years could be good ones...well, that is if we all don't die in December of 2012.
Posted by William at 20:01