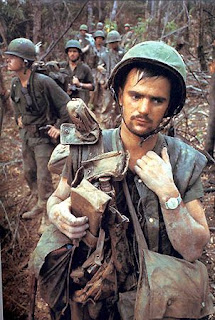 “FUCKING MOVE!!” Sgt. Maya Aroyo screamed back to the remains of Forward Operating Base: White Forest, the thick phalanx of alien trees and limited light increased the odds of their survival after the bloodbath they just lived through. Their attack had been sudden, violent, and completely devastating. For three years, Aroyo had lived at White Forest and now friends slaughtered and taken to be repurposed by the enemy. It was a nightmare, now only a thin hope of escape & evasion lived in her dark soldier’s heart.


“Serge,” Gary Morgan, a member of her unit had a grave tone, “I think we’re far enough.”

“Right,” she breathed out hard, fogging up her helmet visor for a half a second. “I’ll call in the birds.” She clicked into the secure COM-VR-NET via the hovering mirco-C³ UAV above the trees, it was a feeble attempt to prevent the tracking of his comm.-traffic with home-base. “Wildcat 2-5, to FOB Shin.”

“The word is deep serious. Shin. We need EVAC, QRF, and gunships, immediate!”

“Spinning up the hoppers, keep your head down, Wildcat 2-5.” Sgt. Maya Aroyo closed the connection, and screamed at the remains of FOB: White Forest, to move their collective asses to a better defensive position.

But they waited, and waited, while their alien enemy hunted for them. She kept checking the clock floating between her eyes and her tac-map. Nothing! The pickup was late, she thought while looking into the battered faces of her soldiers. While Maya was one of the most experienced noncom squad leaders at White Forest, she was overwhelmed with being the only surviving combat officer, and it fell to her to led the exodus out of the hot-zone. Aroyo was all too aware if the A/G gunships didn’t come soon, they would be cat food for those things hunted them through the rope-tree jungle of this godforsaken world.

“Where the hell is November-Witch, Serge?! She’s late as hell.”Maya shook her armored head and rolled her eyes, not that they could see, though.

“What am I, Morgan, air fucking traffic control?!” Days of being stalker made her jumpy, not matter how much Courage was pumped in. Then, the exhaustion was placed with guilt. “Sorry, Gary, it’s just that-”

“No worries Maya,” he waved his hands, “we’re all working on Courage only out here.” He smiled behind the dirt, moved back to manning his AHL-1 Heavy Support Laser checking the coils. Then Maya’s COM-VR-NET cracked to life, and her stomach leapt to the imagines pouring in. Her rear guard, soldiers she knew were being torn to pieces, they screamed for help into the comm.-network, but there wasn’t a damn thing Maya could do. In response to the vile emotions the video produced, the armor pumped Courage, waves of claim flowed. Maya mass text messaged the survivors to prepare for contact, and then she dialed up to their only hope. “FOB Shin, this is Wildcat 2-5.”

“We’re putting together a QRF now, then less than eight mikes to wheels-up, Wildcat 2-5.” She cursed wildly in the privacy of her helmet, weighted her options, and un-muted the COM-VR-NET.

“Fire mission,” she was immediately clicked over to the base’s gunnery crew network.

“Fire mission here, go ahead 2-5 with coordinates.” The moment the gunnery commander of the artillery back on Shin linked in with the sergeant, the COM-VR-NET established 360 degree visuals, data stream, and secure network with her armor. For that moment, the gunnery commander saw what she saw.

“Need suppressive fire from moving tangos on Grid reference, “she paused and double-checked the grid of her wiped out rear guard. “One, two, six, by three-six, fire for effect, with low-ground steel and needle rain front, blue storm back, confirm by grid numbers, fire mission.”

“Pound it Shin.” Aroyo clicked over to WIDE-COM, “Fire-in-the-hole!” From her raised POV, the jungle floor was littered with armored bodies in prone positions. “Not you, mortar teams, keep setting up.” She directed the teams behind her setting up. Miles away, above the dense rope-trees, four 175mm cannons swung on their motorized platforms, while a gunnery crew-chief linked to the cannons via a local virtual reality network, manipulated the X/Y coordinates, and monitored the loading of the shells.

“Green light, sir.” He spoke, but seemly in his mind, the gunnery chief was miles away at the battle-site, via the telepresence provided by Sgt. Aroyo’s armor.

“Fire!” With one flick of his thumb, the gunnery-chief, unleashed four simultaneous 175mm HV shells, rattling the entire base. These lethal objects sailed over their plotted out route, and dove under the thick canopy. With only a few meters between the shells and the wet ground, explosions rained down with the steel balls and razor-sharp needles directly on top of the Sync warriors still savoring their victory . From her raised position, Aroyo could take in the distant bursting trees, and bio-armor pieces flying in a cloud of dirt.“Die, bastards, die.” She whispered, and then snapped her fingers to the dug-in mortar crew “finish now! I wanna pounded the moment plasma shell explode!” The artillery guns finished with their steel rain shells, and flawlessly switched over to plasma shells. Before the shell-shocked Sync soldiers could recover, there was whistled above them. Sealed in the 175mm rounds was slush hydrogen, when the gunnery AI program back at FOB: Shin sent the command, an incendiary package ignited the slush hydrogen in a supra-heated ground cloud of about half a million degrees. 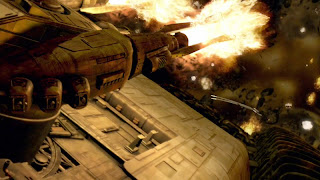 Under the blazing blue haze of the fourth state of matter, the entire assault line of Sync infantry broiled to cinders. But the colonial artillery strike failed to take out the larger alien heavy armored units; the specially design walking mortars. These goliaths simply took a knee, locked in the WIDE-COM unsecure signs, and fired their own 102mm mortar salvos. Aroyo and every colonial armored soldier’s HUD warned them of incoming. Because of the distance, it was on top of them before they could react. Brilliant blind flashed rocked the jungle floor, scrambling the HUD, and all communications. In that moment of white noise, the next salvo of shell burst overhead, loaded with high explosive that detonated like a supernova at surface level. Screaming filled the rope-trees.
Maya rolled from a collapsed tree, up to her feet, laser rifle at the ready, scanning the jungle floor for signs of a Sync rush. She saw only their dead and wounded on the floor. “Mortar team plant some mines! Base of fire team, move up with me! Snipers stand fast, we’re moving up, cover us!” Charred armored bodies were everywhere, some dead, most wounded, and their reverse-engineered personal armored suit had saved them from the hellish fate of the unarmored REMF base personal, all of them, as far as her suit sensor package could discern, they were all KIA. Working as fast as possible tending to the wounded and moves others that could fight under cover, being a combat vet, she knew all too well; that the Sync wouldn’t wait…they had reinforcements on the way, and any wounded would be taken away by those things. She had desperate hope that the QRF was closer, then the trees rang with the alien battle cries, in that one second, her heart dropped any notion of hope. Courage dumped into her shaking body, preventing Maya from acting on the overwhelming instinct to run from the specially designed alien berserkers that were descent towards her. Maya raised her PLC-3, and flipped it to the 40kj setting.
Posted by William at 17:20