Forgotten Classics: SPACE: ABOVE AND BEYOND 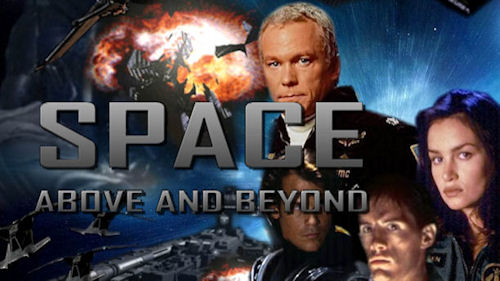 Forgotten Classics is a new series on FWS, that will explore military science fiction that have disappeared from the collective memory of the general public. I can think of no other better example of a forgotten classic that the subject of the first installment of the FWS Forgotten Classics of Military Sci-Fi: SPACE: ABOVE AND BEYOND (SAAB). This was a short-run military FOX TV sci-fi series that ran from September 1995 to June 1996, over  the course of just 24 episodes. The series was created by X-Files producers Glen Morgan and James Wong. The series originally was to run for a total of five season, only lasted one and ending on a cliff-hanger. The series was released in its entirely on a (very) basic DVD collection in 2005. For some fans of sci-fi, this was one of the open salvos of FOX cancelling promising science fiction shows before their time. This was Firefly before Firefly. 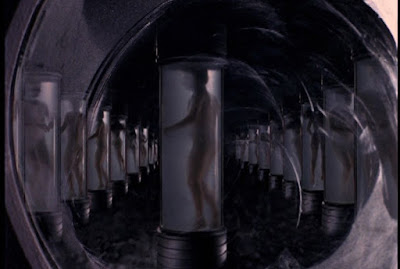 SAAB takes place in 2063-2064 has mankind is struggling with wounds from the bloody A.I. Rebellion, and attempting to colonize deep space. The pilot opens with the United Nations and the massive Aerotech corporation establishing the most distant settlement from the Sol system, the Vista Colony around Episilon Indi (11.8 LYS from Earth). Shortly after, the colony is attacked by a hostile alien force. Another colonial ship is being readied to send to the Tellus colony with young Aerotech colonists and lovers, Nathan West and Kylen Celina. Nathan is thrown off the mission due to a movement on Earth over In-Vitro rights (In-Vitros are artificially gestated humans bred for a war against the AI rebels). Nathan, out of desperation joins the USMC to become a colonial sentry on Tellus. 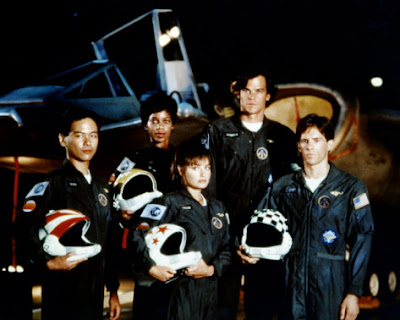 Nathan qualifies for Marine Space Aviator training in Alabama, where he meets the rest of the regular class, including a In-Vitro sentenced to the USMC, Cooper Hawks. During their training, the colonial vessel bearing Kylen was attacked and crashed on Tellus. The UN informs the world that not only does life exist outside of Earth, but these alien wiped out Vista and Tellus. Nathan and the rest of the 58th are rushed through training and mobilized to the front in their He3 burring SA-43 Hammerhead dual atmospheric fighters The 58th Squad, now named "the Wildcards" is led by Colonel T.C, McQueen (one of the best sci-fi characters!), an In-Vitro Special Operations attack jet pilot, wounded in the opening battles of the war, and now assigned to the United States Naval Space Carrier Saratoga. Throughout the rest of the series, the core characters personal struggles are highlighted against the backdrop of the bloody war with the "Chig" aliens. The series ends on a bittersweet note, a cliffhanger coupled with death and hope.

The Impact of SAAB 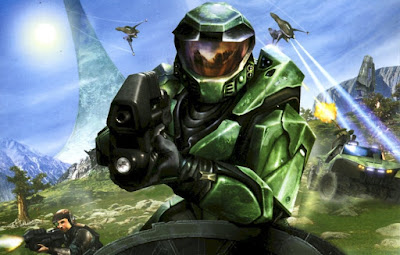 Up until SAAB, there had not been a show firmly centered around a future war on a space carrier since the classic Battlestar Galactica. This show came at a time when Star Trek and it's clean vision of the future dominated the sci-fi landscape, while SAAB showed the grittier, darker side of a future in space.While the show is not well known today, due to the infancy of the Internet at the time of its TV run, it has impacted people creating sci-fi today, with its more realistic air. All one has to do, to see the impact of SAAB is by watch the new Battlestar Galactica, if it was not for SAAB then the new Battlestar Galactica would not have been as breathtaking and groundbreaking.

While CGI effects were featured on other sci-fi shows like Babylon 5, SAAB aired on a major network with a healthy budget allowing for then-cutting-edge CGI. These effects were one of the most expense elements of the show. While I cannot confirm this, it is my firm belief that SAAB influenced the first HALO game. One just has to look at the M590 and the MA5B, the Pelican dropship and ISSCV to witness that Bungie mined the series for their games. In addition, SAAB,was one of the few military science fictions to use conventional weaponry and not energy based weapons, and shortly after this, the trend in military science fiction was to use conventional bullet-firing kinetic weaponry. Consider the USMC 7.62x51mm M590 of Space:Above and Beyond and the UNSC 7.62x51mm MA5B of HALO: Combat Evolved. Along with the ISSAPC from SAAB and the Pelican from HALO.

Why SAAB is a MSF Classic? 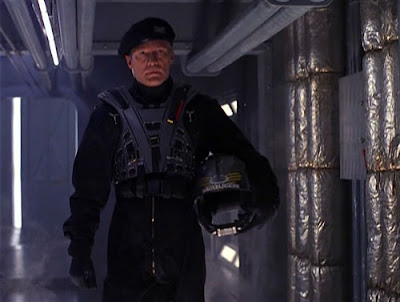 The reason that Space: Above and Beyond (SAAB) is a classic of Military Science Fiction is for it being unique and filled with, what I can only describe as, dark poetry. The last sci-fi property to be set in such a world was ALIENS in 1986. Unlike the Star Trek films and shows, this series did not always project humanity any differently than today, they drank, used drugs, wanted sex, had dirty-minds, along with  racism being alive and well in 2063, and this gave the series an edge not seen in main-stream sci-fi TV show before. Watching marines fight in the terrible conditions of an off-world battlefield while people die, and not just the "red-shirts". 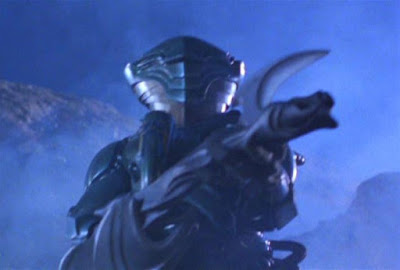 Another way that it is a classic, is that SAAB setup things to come, namely Battlestar Galactica with its dark tone and realistic military portray. Another reason for me, that SAAB is classic, is that it was original. The concept of marines in space fighting an aggressive unknown alien species is not new, but how they showed the world of 2063 is. The USMC is showed much like it is today, the Chigs were shown as complex and brutal, all while preserving an air of mystery. The show's producers, Morgan and Wong, were able masterfully incorporate elements like Johnny Cash, Imperial Japan war-time poetry, Shakespeare, the band X (I kid you not), and humanoid robots that rebelled, all in the same show without making it looked forced or alien to the overall concept. Only Battlestar Galactica has been able to perform such a task recently.

The Historical Context of SAAB 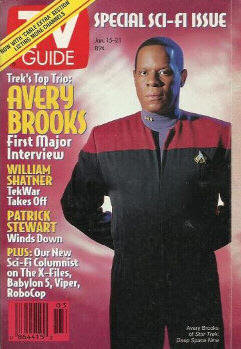 When SAAB premiered in 1995, the landscape of TV sci-fi was much different than today. Science Fiction was popular on the major networks and this was around the same time as the launch of Sci-Fi network. Star Trek ruled the airwaves with no less than three shows. Added to the mix, was Babylon 5, Xena, Hercules, and other cheaper sci-fi shows that allowed for viewers to enjoy a variety of science-fiction every night of the week. So, fans of sci-fi were given the choice between low-budget, often cheesy shows, or the clean, holy-than-thou environment of Star Trek, until this dark military science fiction show came along.The mid-1990's were not today, there was peace, a good economy, no social-media, along with an infant world-wide-web, the realistic vision of future warfare was not hopeful, like the 90's were. While the new Battlestar Galactica is very much a product of our dark time, SAAB was calling back to the time of World War II and Vietnam, which a number of people didn't want to see..after all, it was the 1990's, which were a much happier time.

Why Did It End? 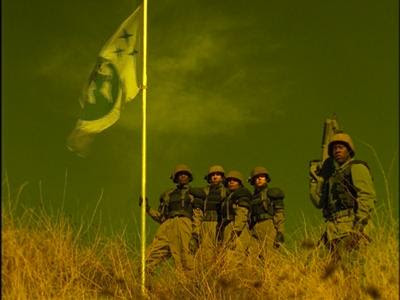 SAAB suffered from the same decisions that also killed Firefly, being jerked around the TV schedule, not enough promotion, and a lack of faith in the show itself. In addition, FOX aired SAAB on Sunday nights, after football, and often the show was delayed, losing the audience or like in my case, your VCR would only tape half of it! Also, FOX believed that the producers of the X-Files could create another mega-hit in this dark-sci-fi war show. However, the sci-fi nature of SAAB did not attract the legions of X-Files fans, nor did the dark dirt hard atmosphere of the show attach fans of the happier Star-Trek universe. The other reasons for the canceling the series was money and rating. If SAAB had the pull of the audience , then the ad money would have flowed in, and the rumored one-million-bucks-an-episode production cost would have been justified. It is my belief, that only because of the X-Files success and the connect of  SAAB to that show was the only reason that the remainder of the season completed, if it had not been, then it would have ended like Firefly.

Is There an  Future for SAAB? 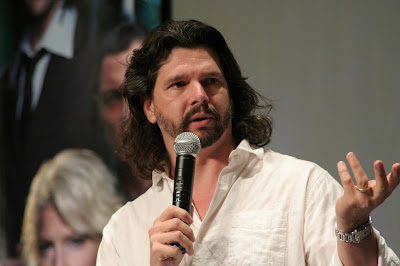 I have read a few rumors that Ronald D. Moore, the god of the new Battlestar Galactica, original approached the Sci-Fi Channel about a remake of SAAB, his second pitch wa BSG. If this is true, than it is possible that a remake is in the future. However it took 20 years for BSG to get a remake. At the moment, SAAB is fondly remembered by fans like me who forge a spot for their beloved show in the old interwebs. Sadly, I do not think there is much of a future for this show, but its influence will live on in the hearts and minds of fans. 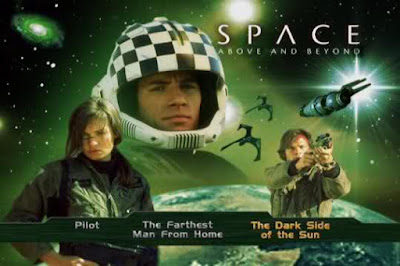 In 2005, SAAB  was finally released on DVD in a 10 disc box set, and while it is nice to finally have the complete series on DVD, the release was disappointing. Little money was spend on it, and there is no special features, no interviews, and somehow the Babylon 5 space station makes an appearance on the title menu screen! I really believed when the DVD collection was released, that Space:Above and Beyond would get some respect and notice, but given the bare-bones nature of the release, it looks like more of the same for the series. In 2012, a United Kingdom media company released a Region 2 PAL DVD set that included all of the features missing from the barebones 2005 release: new interviews, deleted scenes, galleries, some commentary on the epsiodes. Sadly, this was not released on a format for United States DVD players, leaving us out in the cold.

The Best Five Episodes of the Series
Links